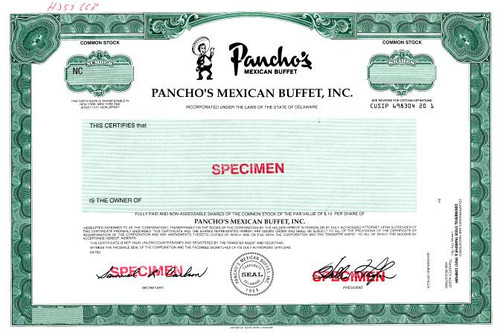 Beautifully engraved specimen certificate from the Pancho's Mexican Buffet, Inc. printed in 1996. This historic document was printed by the American Banknote Company and has an ornate border around it with a vignette of the company's logo. This item has the printed signatures of the Company's President, and Secretary.

Certificate Vignette
Pancho's Mexican Buffet operates about 40 family dining Mexican restaurants that offer an all-you-care-to-eat cafeteria-style buffet. The menu also includes individual entrees and the restaurants offer table service to patrons after they have gone through the service line. (Just raise the small Mexican flag at the table for refills.) The chain's buffet features more than 30 freshly prepared items, including tamales, enchiladas, tacos, and chalupas. Its units are located primarily in Texas. Founded in 1966, Pancho's is owned by Stephen Oyster, a former executive at Jack in the Box. On March 31, 2001, the Company entered into an Agreement and Plan of Merger with two corporations affiliated with Mr. Oyster, Pancho's Foods, Inc., a Nevada corporation . The Merger Agreement provides for a merger of the Company with and into Sub, with the Company being the surviving corporation . The company is no longer pubicly held. The total amount of funds required for the Merger (including related costs and expenses) is estimated to be approximately $7.4 million. Of this amount, approximately $6.9 million will be required to pay the merger consideration, and the remainder will be used for payment of certain fees and expenses associated with the merger. Parent and Sub intend to effect the Merger through credit facilities financing described in the commitment letters described below (the "Commitment Letters"), on the terms and conditions in the Commitment Letters. The Commitment Letters are attached hereto as Exhibits 1 and 2 to this Amendment No. 2 to Schedule 13D. Because financing is a condition to the Merger, each condition to funding set forth in the Commitment Letters is effectively a condition to effect the Merger. There are numerous conditions to these financings. Parent and Sub have delivered to the Company executed copies of (1) a commitment letter from American Commercial Capital LLC ("ACC") to loan up to $5 million Rockbay Properties Ltd. II, a Texas limited partnership and an affiliate of Stephen Oyster ("Rockbay"), on the terms contained in ACC's commitment letter to Rockbay (the "ACC Commitment Letter"), which funds will in turn be transferred to the surviving corporation contemporaneously with the Merger in return for certain of the real property of the surviving corporation, and (2) a commitment letter from Mr. Oyster to loan an amount equal to the aggregate amount of the merger consideration and all other fees and expenses required to be paid by Parent and Sub in connection with the transactions contemplated by the Merger Agreement, less the ACC Commitment, About Specimen Certificates Specimen Certificates are actual certificates that have never been issued. They were usually kept by the printers in their permanent archives as their only example of a particular certificate. Sometimes you will see a hand stamp on the certificate that says "Do not remove from file". Specimens were also used to show prospective clients different types of certificate designs that were available. Specimen certificates are usually much scarcer than issued certificates. In fact, many times they are the only way to get a certificate for a particular company because the issued certificates were redeemed and destroyed. In a few instances, Specimen certificates were made for a company but were never used because a different design was chosen by the company. These certificates are normally stamped "Specimen" or they have small holes spelling the word specimen. Most of the time they don't have a serial number, or they have a serial number of 00000. This is an exciting sector of the hobby that has grown in popularity over the past several years.