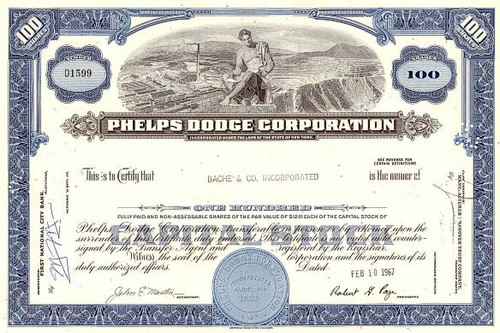 Beautifully engraved certificate from Phelps Dodge Copper Mining Company dated in the 1960s. This historic document was printed by the American Banknote Company and has an ornate border around it with a vignette of an allegorical man in front of mined area next to a processing facility. This item has the printed signatures of the Company's President and Secretary.

Certificate Vignette
The roots of Phelps Dodge run deep. Founded as a trading company in 1834, Phelps Dodge has thrived because of a pioneering philosophy and a dedication to excellence. The company was founded by Anson Greene Phelps and William E. Dodge, who operated an import-export trade business that shipped U.S.-grown cotton to England in exchange for tin, iron, copper and other metals that were needed to support the ongoing development of the new American nation. In the true spirit of free enterprise, Phelps Dodge used the imported copper to produce thousands of miles of copper wire, including the wire used in the first transcontinental telegraph line. As their company diversified, they invested in new railroads, and by the late 1800s, Phelps Dodge had become one of the largest manufacturers of lumber and lumber products in the United States.