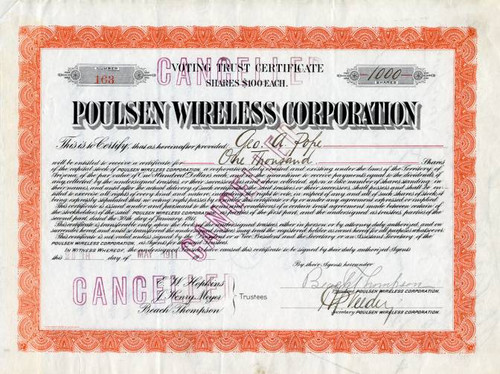 Beautiful certificate from the Poulsen Wireless Corporation issued in 1911. This historic document was printed by the Britton & Rey Company and has an ornate border around it with a vignette of an eagle. This item has the original signatures of the Company's President, and Secretary, and is over 101 years old. 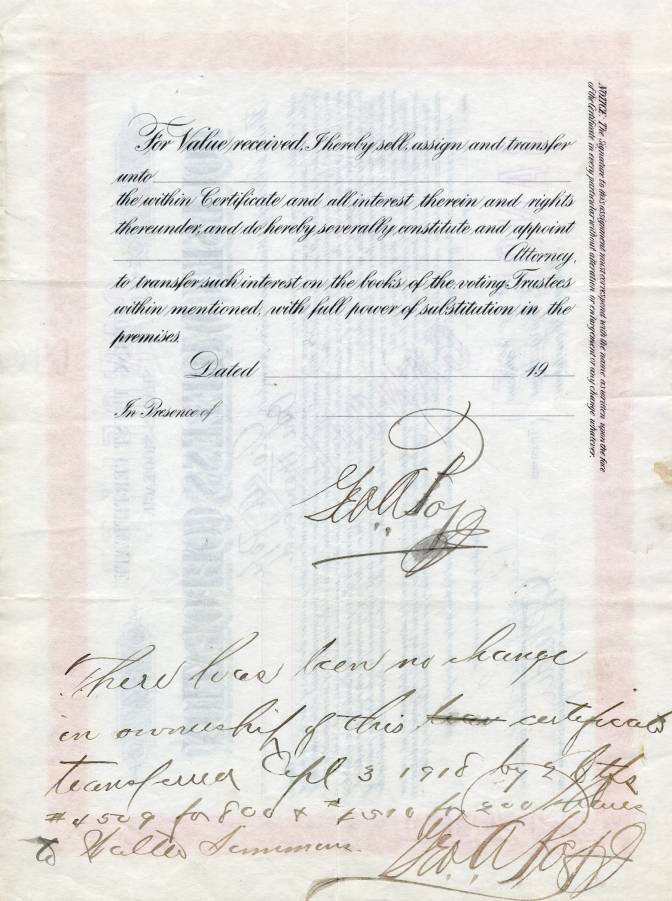 Signature
George A.Pope (George A. Pope, Sr. (1864-1942)) of the Pope estate and member of the lumber company, Pope & Talbot. Moodys manual 1917 POULSEN WIRELESS CORPORATION.--Inc. Oct 31, 1910, in Ariz., to engage in wireless telegraphy and telephony. Owns all the $100,000 capital stock of the Federal Telegraph Co. of California, which company owns and operates wireless telegraph stations at Lents and-Portland, Ore.; San Francisco, Los Angeles and San Diego, Cal.; Phoenix, Ariz.; Seattle, Wash., and Honolulu, T. H. Capital Stock.--Authorized and outstanding, $25,000,000; par, $100. No dividends paid. Officers: Geo. A. Pope, Pres.; E. W. Hopkins, V-P; John L. Deahl, V-P; Augustus Taylor, Sec; A. G. Kellogg, Treas., San Francisco, Cal. Directors: E. W. Hopkins, J. Henry Meyer, Geo. A. Pope, Washington Dodge, Francis Carolan, John L. Deahl, H. P. Vccdcr, San Francisco, Cal.; C. D. Mark, Palo Alto, Cal. Offices, 812 Hobart Bldg., San Francisco, Cal., and Prcscott, Ariz. Annual Meeting, in April, at Prescott, Ariz. -------------------------------------------------------------------------------- Rebirth of Independent Pope & Talbot: Late 1930s After William Talbot died, George Pope, Sr., assumed the position of president of Puget Mill Company and began to pressure McCormick to resign. When McCormick's expansion strategy failed to revitalize the company, he vacated his position in December 1931. Pope was then elected chairman of the board of Charles R. McCormick Lumber Company, with the intention of protecting the interests of the Puget Mill Company. He immediately appointed managers who exemplified his own financially conservative viewpoint, and began to reduce the debt incurred by McCormick. By 1937 all the bank loans and a significant portion of the mortgage bonds were retired. In 1938 the Puget Mill Company brought a suit of foreclosure against the Charles R. McCormick Lumber Company. Unable to pay its obligations of over $7 million, the McCormick Company was forced to cede all of its holdings to the owners of Puget Mill. The principals of the foreclosure suit, George Pope, Sr.; George Pope, Jr.; Frederic C. Talbot; and Talbot Walker, all descendants of the original owners, reacquired the company their forefathers had labored to build. Company Perspectives: Pope & Talbot's strategic focus and corporate structure encompass the complementary businesses of two forest industry groups: wood products and pulp. The Company manufactures softwood lumber and market pulp in the U.S. and Canada. We have continually prospered in the face of cyclical markets since 1849 by planting, cultivating, and creating value for our customers, communities, and shareholders. Our achievements have created a foundation for continuing our cycle of success in the future. George Pope, Sr., became president of the company, which was renamed Pope & Talbot, Inc. in 1940. Before any analysis and reorganization of the lumber operations and steamship activities could take place, however, World War II began. George Pope, Sr., became chairman of the board, allowing his son, George Pope, Jr., to assume the position of president and deal with the demands of the war years. Pope & Talbot mills operated at full capacity during the entire war. The company produced lumber for panel bridges used in the invasion of Europe, tent poles, and Signal Corps material for communication lines. Company lumber was used for the construction of naval housing, and the company's fleet of steamships made vital contributions to the American war effort. Pope & Talbot vessels transported the supplies necessary for waging war in every area of conflict, and stopped at ports including Murmansk, Bizerte, Salerno, Guadalcanal, and Okinawa. The company also suffered casualties: four ships were sunk during the war, including the S.S. West Ivis, which lost its entire crew. During the height of worldwide hostilities, Pope & Talbot was responsible for more than 75 ships. The war helped improve the financial position of the company, which was one of the three largest lumber producers in the entire Northwest by the end of the war. History from Wikipedia and OldCompany.com (old stock certificate research service)