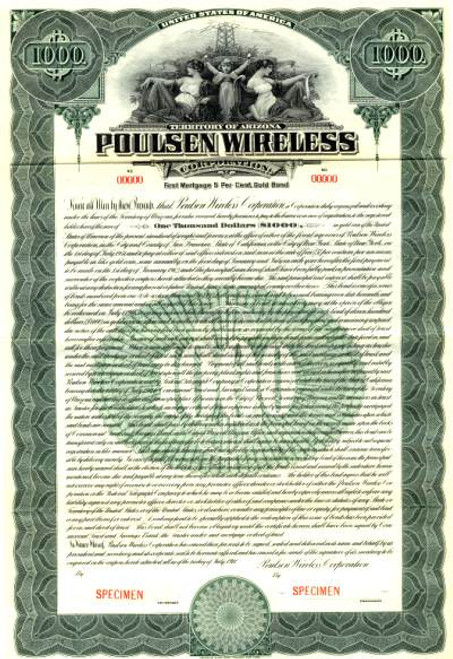 Beautifully engraved RARE SPECIMEN certificate from the Poulsen Wireless Corporation dated 1911. This historic document was printed by the American Banknote Company - New York and has an ornate border around it with a vignette of a child holding up two touches with a radio tower in the background between two allegorical women. There are 80 coupons attached to the bond not shown in the scan. 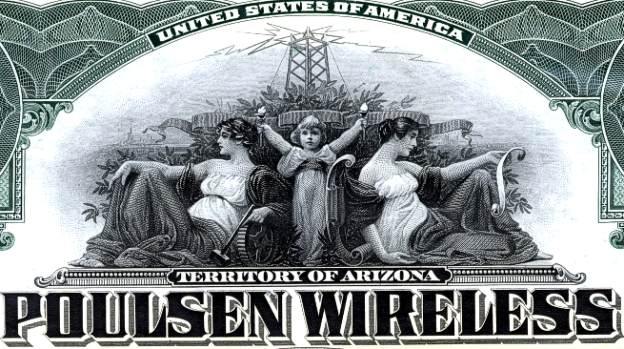 Certificate Vignette
San Francisco was the site of one of the first major wireless stations in the United States with the founding of the "Poulsen Wireless Corporation of Arizona" in 1910 and, later, the Federal Telegraph Company. Though called an Arizona company, it was founded here in San Francisco and transmitted from a site on 48th Avenue between Noriega and Ortega streets, at the Ocean Beach. Primary force behind the commercial development of Valdemar Poulsen's arc wireless transmission method was Cyril Frank Elwell (1884- 1963), who convinced the inventor to license his patents in the United States to him. Elwell was employed by San Francisco Investors to investigate all the existing wireless systems and in 1909 he came to the conclusion that the most promising system was the Poulsen. After ascertaining that the rights were for sale, he went to Denmark and had the system demonstrated to him between Lyngby and Copenhagen. He made a contract with the owners to purchase the patent rights for America, and on returning to America he organized the Poulsen Wireless Telephone & Telegraph Co. with a capital of $5,000,000. This company in 1911 was merged into another company known as the Poulsen Wireless Corporation. It was a large company, and to avoid taxation in different states it was reorganized and operated under the name of the Federal Telegraph Company. About Specimen Certificates Specimen Certificates are actual certificates that have never been issued. They were usually kept by the printers in their permanent archives as their only example of a particular certificate. Sometimes you will see a hand stamp on the certificate that says "Do not remove from file". Specimens were also used to show prospective clients different types of certificate designs that were available. Specimen certificates are usually much scarcer than issued certificates. In fact, many times they are the only way to get a certificate for a particular company because the issued certificates were redeemed and destroyed. In a few instances, Specimen certificates we made for a company but were never used because a different design was chosen by the company. These certificates are normally stamped "Specimen" or they have small holes spelling the word specimen. Most of the time they don't have a serial number, or they have a serial number of 00000. This is an exciting sector of the hobby that grown in popularity and realized nice appreciation in value over the past several years.