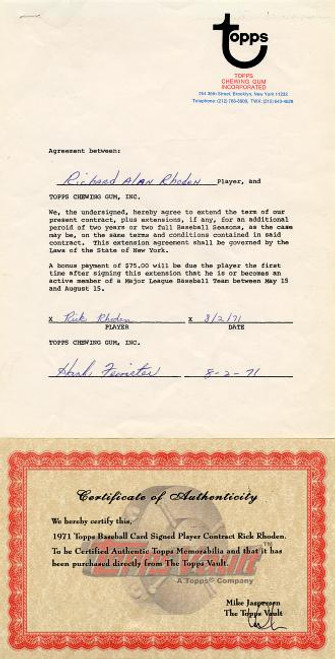 RARE Topps Baseball Card Signed Player Contract signed by Rick RhodenSanders. Direct from Topps' legendary Vault, this item features an original Topps baseball card contract. Contract is signed and dated by the player, as well as an official representative of the Topps Co. Contract measures 8 1/2" X 11" in size and is dated 8/2/1971. By signing this contract, Rick received a bonus payment of $75. This also comes with a Certificate of Authenticity from The Topps Vault.

Certificate Vignette
Richard Alan Rhoden (born May 16, 1953) is a professional golfer and was a Major League Baseball pitcher. During his 16 year baseball career, he played for the Los Angeles Dodgers (1974-1978), Pittsburgh Pirates (1979-1986) and Houston Astros (1989) of the National League; and the New York Yankees (1987-1988) of the American League. Contents [hide] 1 Early years 2 Major League Baseball career 3 Life after baseball: a second career in golf 4 References 5 See also 6 External links [edit] Early years Rhoden was born and raised in Boynton Beach, Florida. Rhoden overcame a childhood bone disease, osteomyelitis, and wore a brace until age 12. He attended Atlantic High School in Delray Beach, Florida, where he was the star pitcher for the school's baseball team. He did not attend college after graduating from high school in 1971, but played minor league baseball in Daytona Beach, El Paso, and Albuquerque until he was called up to the majors in 1974. [edit] Major League Baseball career Rhoden broke into the big leagues, at the age of 21, with the Los Angeles Dodgers on July 5, 1974. As a Pittsburgh Pirate, he was elected to the All-Star team twice (1976 and 1986) and won three Silver Slugger awards (1984-1986). In 413 career games, Rhoden compiled a 151-125 record, a 3.59 ERA, 1419 strikeouts, and one save. He has also hit nine home runs and had 75 RBIs. His teams made it to the post-season twice during his career: the Dodgers in two consecutives seasons, 1977 and 1978. In both of those years, the Dodgers reached the World Series against the New York Yankees, but lost in six games each year. Rhoden earned a reputation as an outstanding hitting pitcher. He had an eleven-game hitting streak in 1984, one of the longest all-time for a pitcher. On June 11, 1988, New York Yankees manager Billy Martin made him the Yankees' starting designated hitter, going 0-1 with an RBI on a sacrifice fly. He batted 7th in the lineup, ahead of Rafael Santana and Joel Skinner. He was the first pitcher to start a game at DH since the AL's adoption of the DH rule in 1973. He was pinch hit for by JosÃ© Cruz in the Yankees' 8-6 victory over the Baltimore Orioles.[1] In his career, Rhoden batted .238 with 9 home runs and 75 RBI. Rhoden's final game was September 29, 1989 for the Houston Astros. [edit] Life after baseball: a second career in golf Since retiring from baseball in 1989, Rhoden has spent a lot of time on the golf course. He has qualified for the United States Senior Open, and has become a dominant player on the Celebrity Players Tour. Rhoden has also played a number of Champions Tour events and has three career top-10 finishes: T-5 in the 2003 Allianz Championship, T-6 in the 2006 3M Championship and T-8 in the 2005 Constellation Energy Classic. His career earnings on the Champions Tour exceed $250,000. He became conditionally exempt for the 2006 season. Rhoden's 2007 season was scuttled due to neck surgery, forcing him into the Tour's 2007 qualifying school. He finished joint first place over the four-day event, earning him a spot into open qualifiers at all regular Champions Tour events in 2008.[2] Rhoden currently lives in Ponte Vedra Beach, Florida.