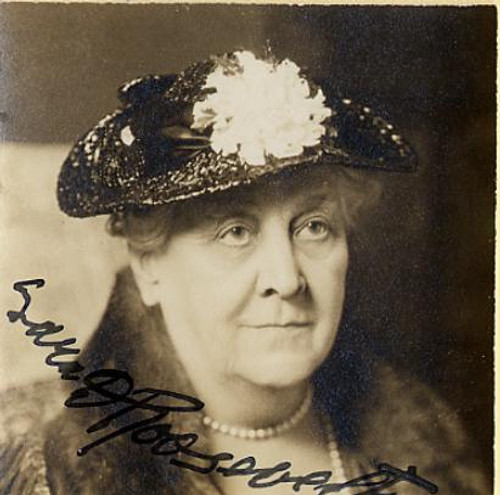 This item is a wonderful original grouping of items written by Sarah Delano Roosevelt, mother to Frankin D Roosevelt. A small 2x2 photo autographed in vintage ink, three envelopes addressed in her hand and an ALS regarding a meeting she hopes to attend. Letter is 5x8, two pages; overall an excellent collection in fine shape Sara Delano Roosevelt (SDR) was the daughter of Warren Delano, a wealthy merchant who made a fortune in the tea and opium trade in China, and after losing it, returned to make a second fortune. By all accounts, she found great happiness in her marriage and in life on her husband's Hyde Park, New York, estate. After the birth of Franklin Delano Roosevelt on January 30, 1882, she was advised to have no more children. She became absorbed in raising her only son, reading to him, giving him baths, and directing his activities herself rather than leaving these tasks to servants. After the death of her husband in 1900, she became still more single-mindedly focused on her son and his welfare. She moved temporarily to Boston when he attended Harvard in order to be near him. No mother could have been more devoted. She was also strong willed, controlling, opinionated, and inflexible. She does not seem to have been enthusiastic about any of the young women her son courted and, when he fell in love and proposed marriage to Eleanor Roosevelt, she tried to change his mind and insisted that the engagement be kept secret for a year. Sara hated politics, hated publicity, hated newspapermen, and was prejudiced against any individual or group not belonging to her elite social class. Ironically, the public lives of both her son and her daughter-in-law exposed her to much that she found distasteful. She retained her dignity, her pride in her family and lineage, and her strong opinions, however, and remained in charge of Springwood, the estate in Hyde Park that she had shared with her husband and then with FDR, until her death. FDR never created a home with ER that was separate from his mother's home and even after Sara's death FDR refused to make any changes in the way the house was furnished or decorated. After Sara died on September 7, 1941, ER wrote in her column that Sara's "strongest trait was loyalty to her family. . . . She was not just sweetness and light, for there was a streak of jealously and possessiveness in her when her own were concerned." ER recognized Sara's fierce strength, but she could not love her. "It is dreadful," she wrote a friend, "to have lived so close to someone for 36 years & feel no deep affection or sense of loss. It is hard on Franklin however."