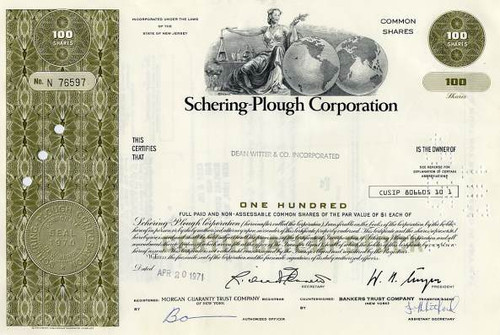 Beautifully engraved certificate from the Schering-Plough Corporation issued in 1971. This historic document was printed by the Security-Columbian Banknote Company and has an ornate border with a vignette of an allegorical woman sitting in front of labratory beakers next to two world globes. This item has the printed signatures of the Company's President and Secretary. 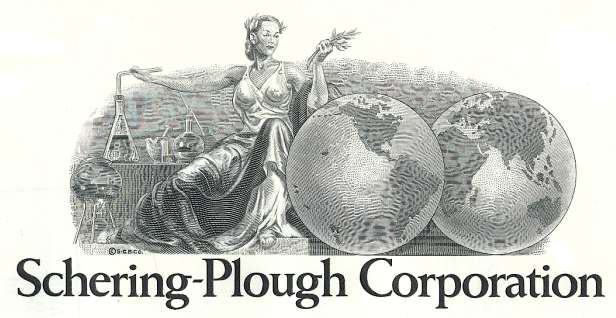 Certificate Vignette
Schering-Plough is a worldwide pharmaceutical company committed to discovering, developing and marketing new therapies and treatment programs that can improve people's health and save lives. The Company is also a recognized leader in biotechnology, genomics and gene therapy. Core product groups are allergy/respiratory, anti-infective/anticancer, dermatologicals and cardiovasculars. Pharmaceutical product lines are complemented by health management programs, a growing worldwide animal health business as well as leading consumer brands of sun care, foot care and over-the-counter products. Innovative research, effective marketing and solid financial management have enabled the Company to achieve significant sales growth, deliver superior financial results and reward shareholders. Schering Corporation was first established in the late 1800s as the U.S. subsidiary of Schering AG, a German-based pharmaceutical and chemical company. In 1928, Schering Corporation was incorporated in New York City and in 1935 in New Jersey. Schering Corporation initially offered a modest but promising line of pharmaceutical products to U.S. consumers, which led to steady growth and a rapid expansion of facilities. The 1940s proved to be a key decade in the history of the company, as it evolved from a European-based company with U.S. operations into a truly American enterprise. Schering Corporation had been nationalized by the U.S. government during World Wars I and II, and in 1952 the company passed into the private sector. For Schering, the 1950s and 1960s were characterized by continued growth, attributable to research and development and acquisition activities. Schering Corporation grew to become a global research-based pharmaceutical firm, and in 1971, merged with Plough Inc., a worldwide manufacturer of consumer products, to create Schering-Plough Corporation. The merger proved successful, as only a decade later the company's sales had grown fourfold. In the 1980s and 1990s, Schering-Plough refined its focus on four key therapeutic areas and continued to excel at innovative approaches to treating disease. New research technologies acquired during this time quickly became important tools in Schering-Plough's research program, enabling the company to achieve important pharmaceutical advances and significant breakthroughs in antihistamines, corticosteroids, antibiotics, anti-infectives and antiviral products. Over the years, Schering-Plough also has divested and acquired businesses and entered into alliances to strengthen its worldwide competitiveness. From its modest beginnings to its presence in more than 125 countries today, Schering-Plough has been guided by a strategy based on growth through research for more than 50 years. Combined with solid financial management and marketing excellence, this strategy has enabled Schering-Plough to succeed in today's competitive environment and develop new products with the potential to improve people's health and extend lives. History from company's press information.