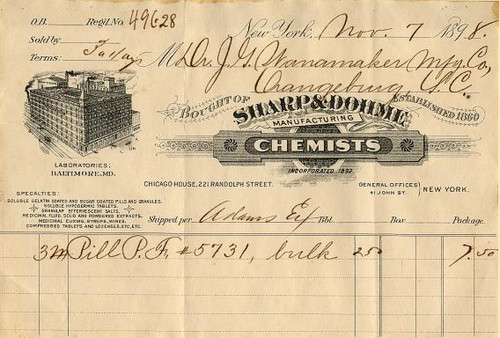 Early invoice from the Sharp & Dohme Manufacturing Chemists dated in 1898. This historic document and has an ornate border around it with a vignette of the company's building in Baltimore. The invoice was issued to the Wannamaker Manufacturing Company in Orangeburg, South Carolina. This item is over 109 years old. 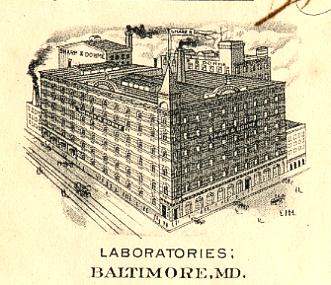 Certificate Vignette
In 1953 when Merck merged with Sharp & Dohme, a drug company with a similar history and reputation as Merck. Sharp and Dohme began as an apothecary shop in 1845 in Baltimore, Maryland. Its success in the research and development of such important products as sulfa drugs, vaccines, and blood plasma products matched the successes of Merck. The merger, however, was more than the combination of two industry leaders. It provided Merck with a new distribution network and marketing facilities to secure major customers. For the first time, Merck could market and sell drugs under its own name. Merck & Co., Inc., also known as Merck Sharp & Dohme or MSD outside the USA and Canada, is a United States pharmaceutical company. It was originally the United States subsidiary of the German company now known as Merck KGaA. In common with many other German assets in the United States, Merck & Co. was confiscated in 1917 during World War I and set up as an independent company. It is now one of the top 5 largest pharmaceutical companies in the world both by capital and revenue. History from Wikipeida and OldCompanyResearch.com.