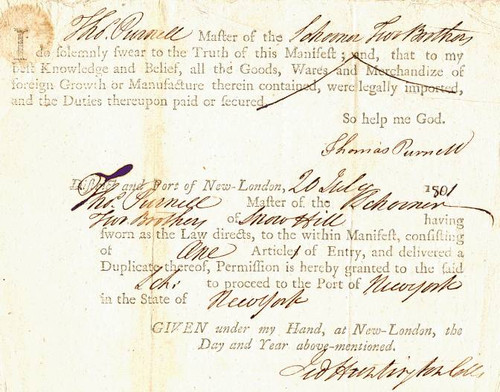 Ship's Master, Thomas Purnell declaration for goods imported on the Schooner named Two Brothers. This item is dated 1801 and has been signed by signed by Revolutionary War General, Jedediah Huntington as as Port Collector, New London, Connecticut. Attached is a second document which is attached to first with sealing wax, which shows the cargo to be 2300 barrels of corn, bound from New London, CT to New York. Documents are approximately 6x8, inches, signed by Jedediah Huntington as Port Collector and by Thomas Purnell as Ship Master. Jedediah Huntington (4 August 1743 25 September 1818), was an American general in the Continental Army during the American Revolutionary War. He was born in Norwich, Connecticut, the son of Jabez Huntington (17191786). He graduated at Harvard in 1763, joined the American army at Cambridge, became a brigadier general in 1777, and took part in many important engagements until the close of the war, when he was brevetted major general in 1783. He was one of the organizers of the Society of the Cincinnati. He became collector of the port of New London in 1789 and held the office 26 years. In 1778 he was a member of the court-martial that tried Gen. Charles Lee and in 1780 of the one that condemned Major AndrÃ©. He "fought courageously during the Battle of Bunker Hill, from which he emerged a Colonel."