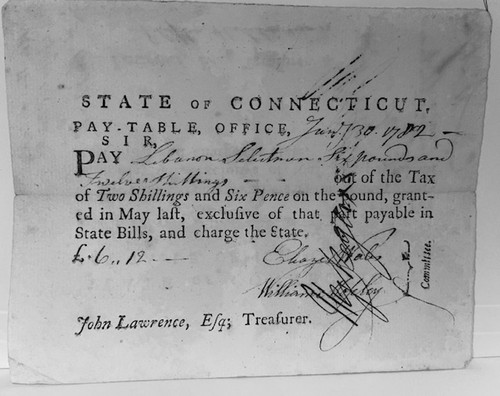 State of Connecticut Pay-Table Office Draft issued in 1782 and was handsigned by Eleazer Wales and Fenn Wadsworth as members of the Committee. It was also signed by Hezekiah Rogers across the face of the document.  Over 240 Years Old. 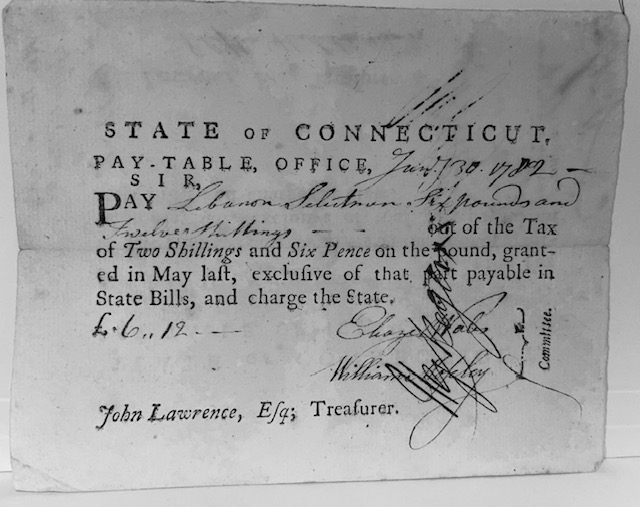 The military finances for the colony of Connecticut were handled by the Pay-Table, also known as the Committee of Four, during the American Revolution (1775-1784). Pay-Table members rotated during the lengthy confrontation with England, and included such notables as jurist Oliver Ellsworth, attorney Oliver Wolcott, Jr. (a future U.S. Secretary of the Treasury), Hezekiah Rogers (an aide de camp to General Jedidiah Huntington, who was also a member), William Moseley, Fenn Wadsworth, Eleazer Wales and General Samuel Wyllys, son of Governor George Wyllys. Financing the Revolution laid a heavy burden upon each colony, especially those which balked at levying taxes. In order to meet immediate needs, such as wages, the colonies relied upon wealthy revolutionists, foreign loans, and taxes and gifts from abroad. Connecticut issued promissory notes such as this. Issuing paper money was only a temporary solution, and worthless without specie or gold and silver backing.