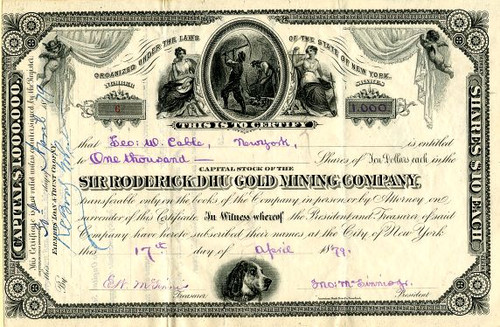 Beautiful certificate from the Sir Roderick Dhu Gold Mining Company issued in 1879. This historic document was printed by American Banknote Company and has an ornate border around it with a vignette of a group of working miners. This item has the signatures of the Company's President, John McGinnis, Jr. and Treasurer, E. W. McGinnis and is over 131 years old.

George W. Cable Signature
The Sir Roderick Dhu Gold Mininig Company became the Roderick and New Discovery Gold Mining Company in 1882. McGinnis Bros. was a bank located in New York which later became McGinnis Bros. & Fearing. They were located on 30 Broad Stret in New York. The firm failed in 1884. John McGinnis,Jr. was New York banker of McGinnis Bros. & Fearing who also served on the board of directors of the Findley Gold Mining Company in 1878. George Washington Cable (12 October 1844 31 January 1925) was an American novelist notable for the realism of his portrayals of Creole life in his native Louisiana. His fiction has been thought to anticipate that of William Faulkner. Cable was born in New Orleans, Louisiana. He served in the Confederate Army during the American Civil War. At the end of the war in 1865, he went into journalism, writing for the New Orleans Picayune, where he would remain through 1879. By that time, he was a well established writer. His sympathy for civil rights and opposition towards the harsh racism of the era showed in his writings, earning him resentment by many white Southerners. In 1884, Cable moved to Massachusetts. He became friends with Mark Twain, and the two writers did speaking tours together. Cable died in St. Petersburg, Florida. In his early novels and stories, George Washington Cable gave us perhaps our most memorable view of the drama of multicultural Louisiana in the nineteenth century, especially of New Orleans Creole life. Born in New Orleans in 1844, Cable was of New England Puritan background on his mother's side and of a Virginia slaveholding family of German descent on his father's side. Upon the death of his father, Cable had to leave school at age fourteen to take a job at the New Orleans customhouse. At nineteen, during the Civil War, Cable enlisted in the Fourth Mississippi Cavalry, little knowing that he was providing himself with an experience that would form the basis of one of his most popular novels. After the war Cable obtained a position as a surveyor of the Atchafalaya River levees, contracted malaria, and was incapacitated for two years. Taking advantage of the enforced "leisure," he began writing and started to contribute a column to the New Orleans Picayune. In 1869 Cable married Louise Bartlett, with whom he was to have five children. As he established a home in New Orleans, he worked as bookkeeper for a cotton firm after a brief stint as a newspaper reporter. Although he had had to forgo formal education, Cable enjoyed private study, often rising early for reading and writing before work. He mastered French and loved to peruse the old New Orleans city records in that language, thereby developing a store of knowledge and lore which he soon began to transmute into fictional narratives. Cable achieved national attention with the publication of his story "'Sieur George" in Scribner's Monthly in 1873. Within the next three years Scribner's Monthly in New York would publish "Belles Demoiselles Plantation," "'Tite Poulette," "Madame DÃ©licieuse," "Jean-ah Poquelin," and other stories, which were collected in Old Creole Days (1879). On the basis of these stories, Cable gained a national reputation as an important local color realist, adept at suggesting language and character of the varied groups of his region. Following serial publication in Scribner's, Cable's novel The Grandissimes appeared as a book in 1880. A short novel, Madame Delphine, was published in the following year. Both novels vividly depict dramatic aspects of Creole life in pre-Civil War New Orleans, including black-white relations and problems stemming from the exploitation of African Americans. In spite of complaints of Creole readers that his representation of their community amounted to caricature, Cable's first three books brought him enough success that he could give up his clerical position and devote himself full time to writing. At the high point of his career Cable turned his attention to polemical themes. Dr. Sevier, a novel dealing with the need for prison reform, was published in 1884, the year that Cable's exposÃ© "The Convict Lease System in the Southern States" appeared in Century Magazine. With Creole New Orleans resentful of its portrayal by Cable and with white southerners in general angered by his writings about injustice toward blacks, Cable found the Northeast, which he enjoyed on several trips, more and more congenial. In 1885 he moved his family to Northampton, Massachuseetts, where he would be closer to publishers and to friends like Mark Twain, with whom he had recently conducted a successful reading tour. Noteworthy among Cable's publications after his move north are The Negro Question and John March, Southerner, a novel of an aristocratic southerner's attempt to transcend limitations of family and regional background. The Cavalier (1901), a popularly successful novel for which he drew on his Civil War experience, marks Cable's turn toward a more romantic type of fiction in the latter part of his career. His work at this stage has been criticized for sometimes being excessively tailored to demands of genteel editors and readers. Yet all in all, it can be said that with his unflinching representation of moral dimensions of interethnic relations, his imaginative understanding of the impact of the past on the present, and his aesthetic sensitivity to exotic aspects of his region, Cable helped prepare the ground for William Faulkner, Eudora Welty, Flannery O'Connor, and other modern southern writers. History from OldCompany.com (old stock certificate research service).