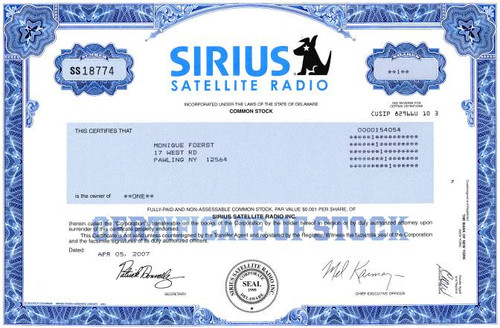 Beautifully engraved uncancelled stock certificate from Sirius Satellite Radio issued in 2007. This historic document was printed by the Security-Columbian United States Banknote Company and has an ornate border around it with a vignette of of the Company's logo. This item has the printed signatures of the Company's Chief Executive Officer, Mel Karmazin and Secretary.

Certificate Vignette
Sirius XM Radio Inc. (NASDAQ: SIRI) is an American broadcasting company that provides two satellite radio services (SDARS) operating in the United States, Sirius Satellite Radio and XM Satellite Radio. The company also owns a minority interest in Sirius XM Canada, an affiliate company which provides Sirius and XM service in Canada. The company in its current incarnation was formed following the acquisition of XM Satellite Radio, Inc. by Sirius Satellite Radio, Inc. on July 29, 2008. On February 19, 2007, Sirius Satellite Radio and XM Satellite Radio announced a merger that would combine the two radio services and create a single satellite radio network in the United States. The merger brought the combined companies a total of more than 18.5 million subscribers based on current subscriber numbers on the date of merging. The proposed merger was controversial because, in 1997, the U.S. Federal Communications Commission (FCC) granted only two licenses and, in order to ensure a state of competition, stipulated that one of the holders would not be permitted to acquire control of the other. Each share of XM stock was replaced with 4.6 shares of Sirius. Each company's stockholders initially retain approximately 50% of the joined company. Sirius CEO Mel Karmazin became CEO of the new company, and XM chairman Gary Parsons was named chairman. XM CEO Hugh Panero stepped down in August 2007. In 2011, SiriusXM announced that the company will offer personal radio channels like Pandora. The new features will allow listeners to replay, skip and ban songs, along with five hours' worth of time-shifting capabilities on most channels and some on-demand features. History from Encyberpedia and OldCompany.com (old stock certificate research service)