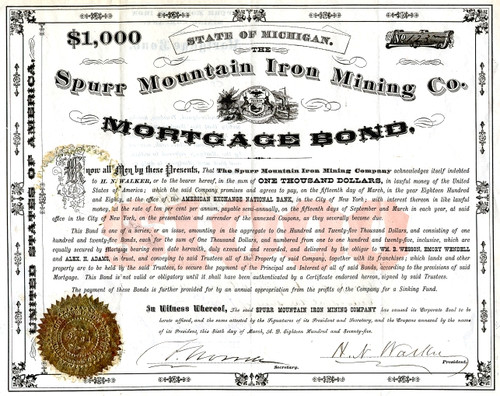 Beautifully engraved certificate from the Spurr Mountain Iron Mining Co. printed in 1875. This historic document was printed by the American Banknote Company and has an ornate border around it with a vignette of the company's logo and name. This item has the signatures of the Company's President, Heury N. Walker and Secretary, Freeman Norvell and is over 135 years old. 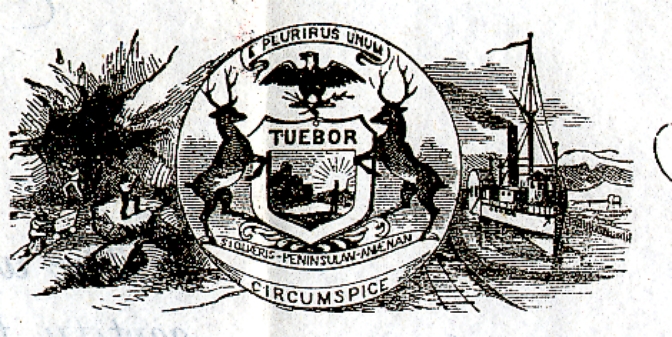 Certificate Vignette
Swineford's history of the Lake Superior iron district, its mines and furnaces By Alfred P. Swineford: This company was organized in 1872, and commenced operations by the purchase of the south half of the northwest quarter and the north half of the southwest quarter of section 24, township 48, north of range 31 west, embracing that portion of the Michigammi Iron Range including the celebrated Spurr Mountain, and in all 160 acres of land. Capt. W. H. Morrison was soon after placed in charge of the location, and the work of developing the mine and facilitating access to it at once commenced. Roads were cut out to the town of Michigammi, and to the saw-mill on the west end of Lake Michigammi, and houses and a blacksmith shop constructed. The mine was uncovered, and test pits disclosed an immense deposit of first-class black magnetic ore, yielding from 65 to 69 per cent. of metal, remarkably free from deleterious substance. The show of ore is very large. The hill is a hundred and twenty-eight feet high at the point where work has commenced, and a drift into it at its base of ninety feet from the south side, has not reached across the deposit. The ore is of the same high quality throughout, and the mass apparently inexhaustible. The hill extends to the eastward from this point eight hundred feet to a stream aftording a splendid water power, and again rising from the east bank of the stream extends to the east line of the location. To the westward it also reaches to the west boundary line. Throughout this range the magnetic compass indicates the continuance of the same deposit or vein. Stripping has been done from the highest point to the base of the hill on the south side of Spurr Mountain proper, and at this point mining operations will be at onee commenced and carried on throughout the winter by as large a force as can profitably be worked. The main line of the Marqnette, Houghton & Ontonagon Railroad runs through the location, and is two hundred feet south of the mine. A side track of eight hundred yards in length, with its summit at the foot of the mine, Ib constructed, connecting it at each end with the track to Marquette and that to L'Anse respectively. The distance is twenty-four miles to L'Anse and thirty-nine to Marquette, and ore can therefore be shipped with equal facility at both ports. The improvements already complete, in addition to the roads and stripping above mentioned, are a large boarding-house, two large dwellings, ten smaller dwellings, a barn, and a blacksmith shop. The force now employed, in addition to the captain, is thirty men and six teams, and this is to be increased by miners whose work is now ready for commencement. In quantity and quality of ore, facility for mining and loading on to cars, and with the two ports to ship from, this mine is one of the most promising in the entire district. In 1872, officers were Heury N. Walker, President; Freeman Norvell, Secretary and General Manager; T. B. Brooks, Consulting Engineer; WH. Morrison, Mining Captain.