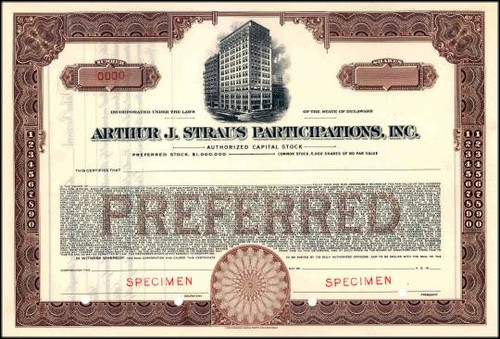 Beautifully engraved SPECIMEN certificate from the Arthur J. Straus Participations, Inc. This historic document was printed by the Columbian Banknote Company and has an ornate border around it with a vignette of a street corner. 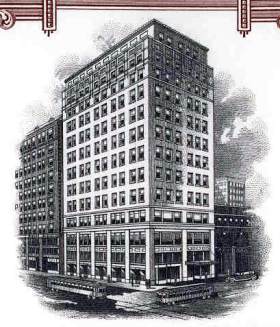 Certificate Vignette
When the Straus office building opened in 1924, perhaps few could have imagined the significance of the decades ahead for the structure....and its second opening in 1997 as the elegant 96-room Best Western Inn Towne. Well known in Milwaukee real estate, German-born Arthur J. Straus designated the building as his company's headquarters. An important link in the development of the skyscraper in Milwaukee, the structure has a Corporate Gothic style which followed earlier classical models and pre-dated the high rise look as we know it. The sleek building is surrounded by a recessed penthouse, which crowns above the twelfth floor of today's Inn Towne king rooms. Over the decades, Wisconsin Avenue pedestrians have noted the building's decorative top and exterior accented by Gothic ornamentation in cream-colored terra and copper-trimmed details at the cornice. As a prominent office building in a prime downtown location, its tenants included medical specialists, dentists and attorneys... some of whom rented space for many years. In the 192O's, building people stepped outside under the Straus ornate marquee onto Grand Avenue (now Wisconsin Avenue) to a world of rumbling and clanging streetcars, a busy merchant scenario and vaudeville and early movie theaters....in which the area abounded. In the decade to follow, ladies in downtown fashions of veiled hats and belted suits and gentlemen sporting contrasting coats and trousers and straw hats may have paused in the summertime under awnings of Liggett's drugstore' which occupied the building's corner main floor space. The lobby's beautiful coffered, barrel-vaulted ceiling, which has been restored, welcomes today's hotel guests and footsteps echoing on the marble floors re-echo that of the hundreds of thousands who entered the distinctive lobby over the decades. About Specimens Specimen Certificates are actual certificates that have never been issued. They were usually kept by the printers in their permanent archives as their only example of a particular certificate. Sometimes you will see a hand stamp on the certificate that says "Do not remove from file". Specimens were also used to show prospective clients different types of certificate designs that were available. Specimen certificates are usually much scarcer than issued certificates. In fact, many times they are the only way to get a certificate for a particular company because the issued certificates were redeemed and destroyed. In a few instances, Specimen certificates we made for a company but were never used because a different design was chosen by the company. These certificates are normally stamped "Specimen" or they have small holes spelling the word specimen. Most of the time they don't have a serial number, or they have a serial number of 00000. This is an exciting sector of the hobby that grown in popularity and realized nice appreciation in value over the past several years.