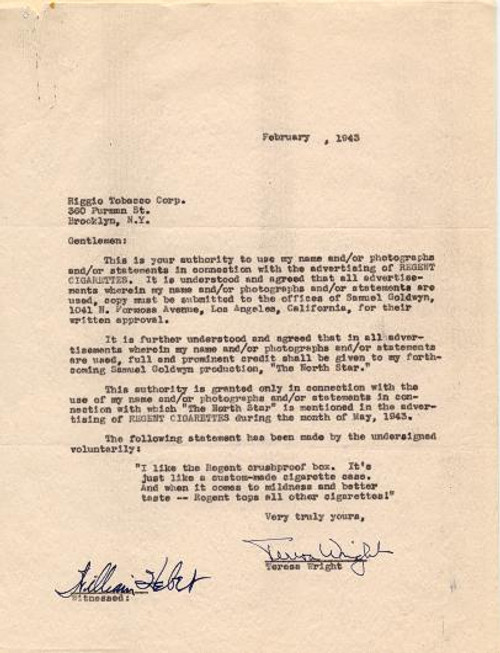 Teresa Wright's Signature
Wright (October 27, 1918 March 6, 2005), born Muriel Teresa Wright, was an Academy Award-winning American actress. Wright was born in Harlem, New York City and grew up in Maplewood, New Jersey. During her years at Columbia High School, she became seriously interested in acting and spent her summers working in Provincetown theater productions. Following her high school graduation in 1938, she returned to New York and was hired to understudy the role of Emily (played by Dorothy McGuire and later Martha Scott) in Thornton Wilder's Our Town. She took over the role when Martha Scott went to Hollywood to make the film version of the play. In the fall of 1939, she appeared in the stage play Life with Father, playing the role of Mary Skinner for two years. It was there that she was discovered by a talent scout hired by Samuel Goldwyn to find a young actress for the role of Bette Davis' daughter in the 1941 adaptation of Lillian Hellman's The Little Foxes. She was immediately signed to a five-year Hollywood contract but asserted her seriousness as an actress. Her contract was unique by Hollywood standards because it contained the following clause: "The aforementioned Teresa Wright shall not be required to pose for photographs in a bathing suit unless she is in the water. Neither may she be photographed running on the beach with her hair flying in the wind. Nor may she pose in any of the following situations: In shorts, playing with a cocker spaniel; digging in a garden; whipping up a meal; attired in firecrackers and holding skyrockets for the Fourth of July; looking insinuatingly at a turkey for Thanksgiving; wearing a bunny cap with long ears for Easter; twinkling on prop snow in a skiing outfit while a fan blows her scarf; assuming an athletic stance while pretending to hit something with a bow and arrow."[1] After earning an Academy Award nomination for The Little Foxes, Wright appeared as the wife of Lou Gehrig in The Pride of the Yankees and then as Greer Garson's daughter-in-law in Mrs. Miniver. She received two Academy Award nominations that year, for Lead Actress (for Pride of the Yankees) and winning the award for Best Supporting Actress Oscar for (Mrs. Miniver). In 1943 in the film Shadow of a Doubt, directed by Alfred Hitchcock, she played the innocent girl who discovered that her beloved uncle was a murderer. Other notable films include The Best Years of Our Lives (1946) -- like Mrs. Miniver, a film focused on home life affected by World War II -- and The Men (1950). Wright rebelled against the studio system of the time; When Samuel Goldwyn fired her, citing her refusal to publicize a film, she expressed no regret about losing her $5000/week contract: The type of contract between players and producers is, I feel, antiquated in form and abstract in concept. ... We have no privacies which producers cannot invade, they trade us like cattle, boss us like children.[2] After 1959 she worked mainly in television and on the stage. She was nominated for Emmys in 1957 for The Miracle Worker and in 1960 for The Margaret Bourke-White Story. She was in the 1975 Broadway revival of Death of a Salesman and the 1980 revival of Morning's at Seven, for which she won a Drama Desk Award as a member of the Outstanding Ensemble Performance. Her more recent movie appearances included a major role in Somewhere in Time and the role of Miss Birdie in John Grisham's The Rainmaker in 1997. She has two stars on the Hollywood Walk of Fame, one for motion pictures at 1658 Vine Street and one for television at 6405 Hollywood Blvd. Wright was married to writer Niven Busch from 1942-1952; they had two children. She married playwright Robert Anderson in 1959; they later divorced, but maintained a close relationship until the end of her life. She died of a heart attack at Yale-New Haven Hospital in Connecticut at the age of 86. Academy Awards and nominations 1943 - Won Best Actress in a Supporting Role - Mrs. Miniver 1943 - Nominated Best Actress in a Leading Role - The Pride of the Yankees 1942 - Nominated Best Actress in a Supporting Role - The Little Foxes History from Wikipedia and OldCompanyResearch.com.