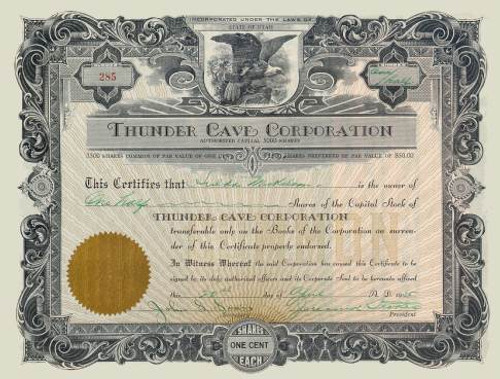 Beautiful certificate from the Thunder Cave Corporation issued in 1935. This historic document has an ornate border around it with a vignette of an eagle. This item is hand signed by the company's president Jeremiah Stokes and its secretary, Jack Sears . This certificates is over 72 years old. Thunder Cave was a book written in 1932 by Jeremiah Stokes, and the characters were created by Jack Sears as the artist. Thunder Cave: The Thrilling Adventures of Gian Wigwah and the Two Little Colored Boys, Jasper and Zebbie Told in Twenty-one Fascinating Episodes of Sparkling Humor and Gripping Mystery Illustrated by Jack Sears (ISBN: 0914740393) written by Stokes, Jeremiah