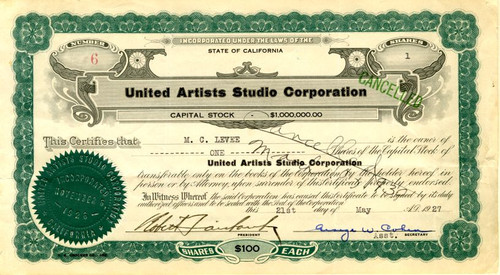 Beautiful RARE certificate #6 from United Artists Studio Corporation issued on May 21, 1927. This historic document has an ornate border around it with the company's name on top center. This item has the signatures of the Company's President, Robert Fairbanks and Secretary, George W. Cohen. The certificate was issued to M. C. Levee and is over 88 years old. Robert Fairbanks, the brother of Douglas Fairbanks, Sr. was the president of the corporation. George W. Cohen was one of the original founders of the International Academy of Motion Picture Arts and Sciences. The certificate was issued to M.C. Levee and endorsed by him on the back.