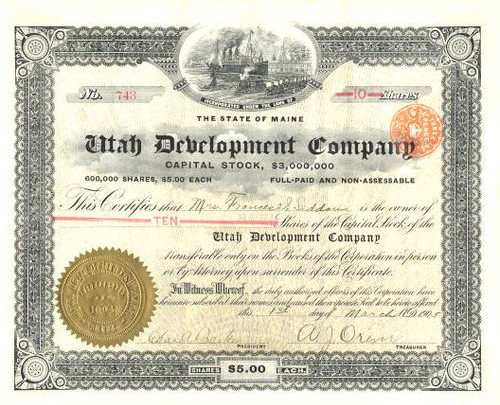 Beautifully engraved certificate from the Utah Development Company issued in 1905. This historic document has an ornate border around it with a vignette of a ship in a harbor with a train passing in front. This item is hand signed by the Company's President ( Chas. A. Baker ) and Treasurer ( A. J. Orem ) and is over 99 years old. 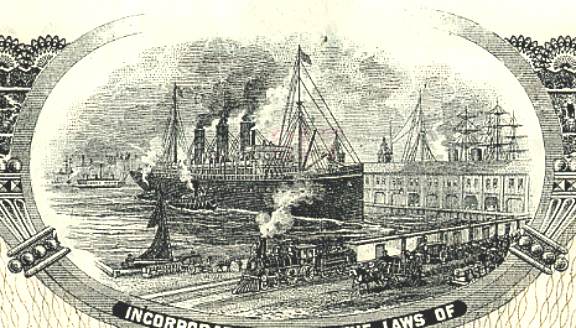 Certificate Vignette
The Utah Development Company was organized in 1905 with a capitalization of $3,000,000 as successor to the Red Wing Mining Compay ( Owners of the Red Wing Mine ). The company also is said to have assumed control of the Butler - Liberal Consolidated Mining company. (Copper Handbook, 1906) In late 1906 a group of independent businessmen began to develop the coal reserves in the region east of Helper near what is now Kenilworth. A coal company, appropriately called Independent Coal & Coke Company, was organized by L. H. Curtis, F. A. Sweet, W. C. Orem, C. N. Strevell, and James H. Patterson, all of Salt Lake City, and A. J. Orem. The organizers chose the Independent name because of the new company's independence from any large corporate or railroad interests. The new coal company was incorporated on October 13, 1906 in Wyoming to develop coal property north of Price. (Utah corporation, index number 6054; Wyoming 429) The Orems later organized the Castle Valley Coal Company. The production of the Castle Valley Coal Company during mid 1911 was about 500 tons daily, increasing to about 1,000 tons per day by September 1, 1911. The coal was mined with machine undercutters and hauled from the mine in four-ton wooden and steel mine cars, using three Goodman 12-ton and one Goodman 6-ton electric locomotives in the mine haulage. After leaving the mine, the loaded mine cars were lowered to the tipple at Mohrland through the use of a 7,000 foot, four-foot gauge, double-track gravity tramway, which had a maximum downward grade of nine percent. The Castle Valley mine was noted for not needing timbering within the mine, as was the Hiawatha mine, an advantage of the particular hardness of the coal produced by the two mines. The coal at the Castle Valley mine came from three different veins, located one above the other, with all three veins totaling sixty-three feet thick in veins of from seven to twenty-three feet thick. (Higgins: Castle Valley, pp. 15-18) According to a local newspaper, "On October 5, 1912, the Salt Lake and Utah Railroad Company was formed by A. J. Orem, a Nevada mining man, to build an electric interurban line between Salt Lake City and the vicinity of Provo. It was completed in 1914 and began regular service, Salt Lake to Provo, on July 24th of that year."