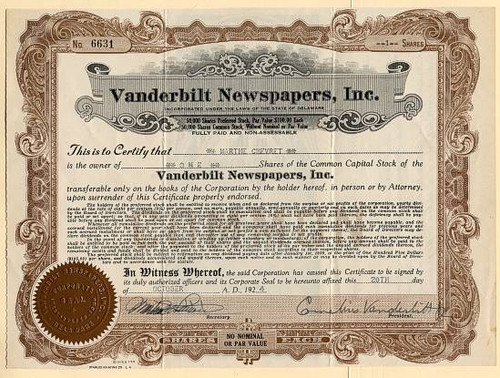 Beautiful certificate from the Vanderbilt Newspapers, Inc. issued in 1924. This historic document was printed by the Goes Company and has an ornate border around it with a vignette of the company's name in fancy print. This item is hands signed by Cornelius Vanderbilt Jr and is over 91 years old.

Certificate Vignette
The grandson of the Cornelius Vanderbilt, Cornelius Vanderbilt, Jr., became a well-known writer, newspaper publisher, and movie producer. Cornelius Vanderbilt IV (1898 1974), who often wrote under the name of Cornelius Vanderbilt Jr., was the son of Grace and Cornelius Vanderbilt III, who worked in the newspaper industry, and wrote several books. He attended Harstrom's Tutoring School and St. Paul's as a young man, then served in the Ambulance Service during the First World War where he became a driver when a general asked the enlisted men if anyone could drive a Rolls Royce. Vanderbilt was discharged from the army after WWI as a buck private. In 1922, he joined the newly organized New York Civitan Club. He reenlisted for World War II as a major. To his parents' dismay, he decided to become a newspaperman. His parents detested the press, seen by them as an invasion of privacy. He worked as a staff member of the New York Herald and later The New York Times. Considered a bohemian by his parents, he was frequently at odds with them. In the early 1920s, Vanderbilt launched several newspapers and tabloids--the Los Angeles Illustrated Daily News, the San Francisco Illustrated Daily Herald and the Miami Tab among them. Despite claiming to uphold the highest standards of journalistic excellence, the publishings lasted only two and a half years. Vanderbilt Inc. ceased operations with losses amounting to nearly $6 million. Vanderbilt subsequently went to work as an assistant managing editor of the New York Daily Mirror. In addition to his memoirs, Farewell to Fifth Avenue, Vanderbilt authored other books, including a biography of his mother titled Queen of the Golden Age. Vanderbilt's 1920 marriage to a well-connected New York socialite named Rachel Littleton ended in divorce in 1927. He was to marry six more times, including to Helen Varner who later married Jack Frye, founder of TWA. Vanderbilt made his home in Reno, Nevada and continued to write and lecture on world affairs. He was a strong supporter of the newly created state of Israel. He died in 1974.