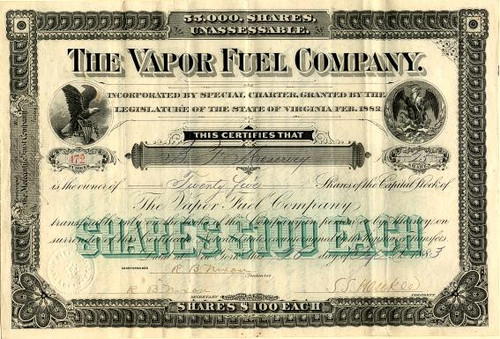 Beautiful certificate from the Vapor Fuel Company issued in 1883. This historic document was printed by American Banknote Company and has an ornate border around it with a vignette of an eagle. This item has the signatures of the Company's President and Secretary and is over 124 years old. 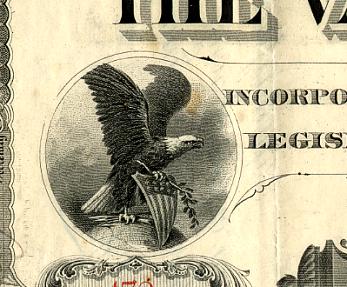 Certificate Vignette
THE SCHOOL OF MINES QUARTERLY. VOL. V. NOVEMBER, 1883, TO JUNE, 1884 Petroleum as a Fuel in Iron Manufacture and Metallurgy.--The Vapor Fuel Company gives details of the apparatus used to utilize petroleum as a fuel for heating and puddling furnaces. The generator of " vapor-fuel " is termed the " thermogen," and consists of two retorts of the best cast-steel, tightly elbowed together at the top. Within the inner retort are two globes, also of cast-steel, while surrounding the whole and resting upon a base of brick-work is the apparatus complete. The crude petroleum is kept in tanks underground situated at some convenient point outside of the works. To produce the "vapor fuel," steam is forced between the two retorts, is superheated, and thence passes into the lower globe within the inner retort and then into the upper, heating them both intensely. A small force pump connected with the '' thermogen" forces the oil through a small pipe, entering above the upper globe, upon the surface of which it falls in a fine spray. This globe is generally so intensely heated by the steam that has passed through it as to vaporize the oil instantly. Then the steam, which has passed out of the " thermogen " through a pipe extending from its top around on the outside to its base, re-enters, and, mingling directly with the gas. acts as a carrier, tak1ng it through a pipe from the top of the retorts to the furnace. " Vapor-fuel'' is used at the Norway Iron Works for boiler heating, for puddling, steel-making and reheating furnaces, and has been found entirely satisfactory. It is easily regulated, and under control it affords a high heat at a moment's notice, gives off no dangerous or disagreeable gases, and there are no ashes or debris to be removed where it is used. One man can operate a " thermogen" with ease, acting as engineer and fireman, and start a flame that has a heat of 6,000 degrees Fahr. in one minute, and yet with the turning of a valve can extinguish it entirely or reduce it to the extent that the exigencies of any operation may demand. The use of "vapor-fuel " for the heating of steel ingots and blooms and similar works is said to be satisfactory. When applied to steel-melting, however, its merits are said to be still more conspicuous, no expensive alterations of a coal-gas furnace or the introduction of'' vapor-fuel'' being necessary. The cost of a " vapor-fuel " plant doing the same work as a coal-aas plant is said to be one-tenth that of the latter, while it also insures a great saving in labor. Eng. and Min. Journal, Dec. 29, 1883. W. F. M. History from the THE SCHOOL OF MINES QUARTERLY. VOL. V. NOVEMBER, 1883, TO JUNE, 1884. PUBUSHED FOR THE ALUMNI ASSOCIATION, THE ENGINEERING AND THE CHEMICAL SOCIETIES OF THE SCHOOL OF MINES, COLUMBIA COLLEGE. NEW YORK. JOHN WILEY & SONS, 1884 and OldCompanyResearch.com.