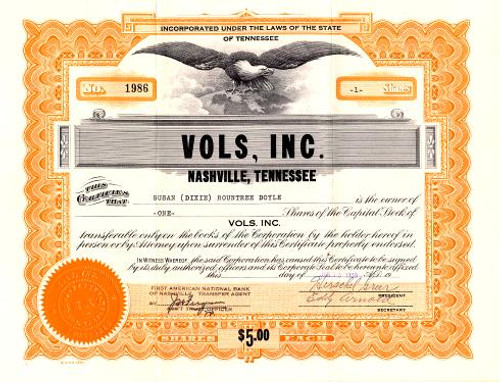 Beautifully engraved certificate from the Vols, Inc. issued in 1959. This historic document has an ornate border around it with a vignette of the company's name. This item has the signatures of the Company's President, Herschel Lynn Greer and Secretary, Eddy Arnold and is over 46 years old. In 1901, while baseball was still in its infancy, minor league baseball came Nashville in the form of the Nashville Vols. The Vols were inaugural members of the Southern Association. Herschel Lynn Greer, Sr. (1906-1976). Born in Dickson County, Tennessee, Greer made his mark in the financial business when he co-organized Guaranty Mortgage Company in 1940 and served as President and Chairman of the Board until 1969. Mr. Greer was an avid baseball fan and one of the organizers of Vols, Inc., a corporation organized to keep baseball in Nashville. He headed the drive to sell stock in Vols, Inc. (in which there were 4876 stockholders). He served as the first president of the Nashville Vols, which was successful in retaining a baseball club in Nashville for several years. In 1978, the city of Nashville and Sounds president Larry Schmittou posthumously honored Mr. Greer by naming the home of the Nashville Sounds "Herschel Greer Stadium."