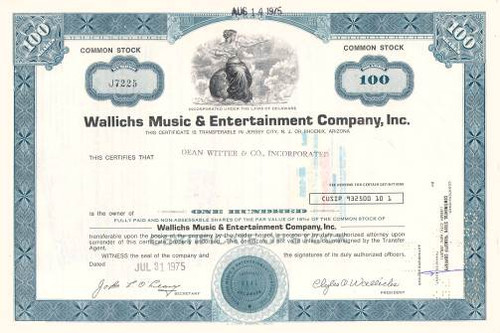 Beautifully engraved certificate from the Wallichs Music & Entertainment Company, Inc. issued no later than 1975. This historic document was printed by the Jefrries Banknote Company and has an ornate border around it with a vignette of an allegorical woman sitting on a globe. This item has the printed signatures of the Company's President and Secretary and is over 28 years old. Wallichs Music City was the premier music store in Southern Cal for decades. Wallich's Music City record store was located at the corner of Sunset & Vine in Los Angeles. It was a special store and a place to go for tickets, sheet music, LP's and 45's, tapes(8 track and cassette). They also sold TV's and musical instruments. They were located in Hollywood on the corner of Hollywood and Vine. It was one of the most famous music stores in the country operated from 1940 to 1978. It was the first music store to seal record albums in cellophane and put them in display racks for customers. It was also the first to have demonstration rooms for listening. Music fans flocked there to meet artists like Judy Garland and Johnny Mercer to have them sign sheet music of their latest hits. Owner Glenn Wallichs started Capitol Records from a storefront office in the building. Wallichs Music City became into Wallichs Music & Entertainment Company and opened up other stores.