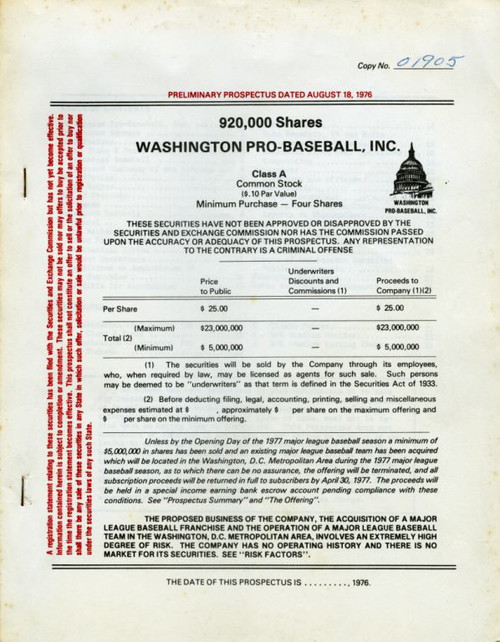 Washington (DC) Pro Baseball, Inc. - 34 page Prospectus dated 1976. Includes cover letter. Below is an AP article regarding the Stock Offering: Washington Would Take New Franchise Washington (AP)--A Washington group with hopes of returning baseball to the nation's capital yesterday said it would accept an expansion team if an existing franchise can not be purchased. E. Joseph Wheeler, a spokesman for Washington Pro-Baseball, Inc., told newsmen the primary goal of the company is to acquire an existing team, preferably in the National League. Wheeler, a 50-year-old Washington businessman, had ruled out an expansion franchise when he first announced the project on Aug 20, saying an existing National League team was preferred and then an American League club. Wheeler held the news conference to announce the Security and Exchange Commission had given the company procedural clearance to sell stock to the public. Wheeler and his group want to put a team in Washington in the form of community ownership through a public stock issue. If Wheeler's group sells all the stock it will offer, it will have $23 million to buy and operate a franchise. The corporation plans to make a maximum offering of 920,000 shares of Class A stock at $25 a share with a minimum purchase of four shares. History from OldCompany.com.