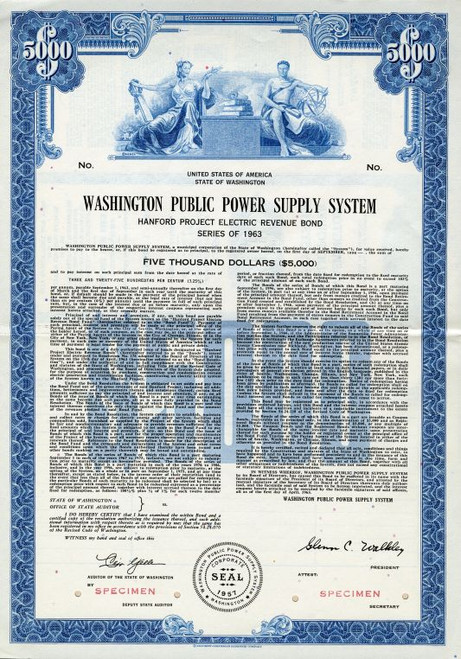 Beautifully engraved RARE Specimen $5000 Hanford Project Electric Revenue Bond from the Washington Public Power Supply System - WPPSS dated May 16, 1963. This is a $5,000 bond that was due on September 1, 1996. This historic document was printed by the Security Columbian Banknote Company and has an ornate border around it with a vignette of an allegorical woman holding an tablet and a man holding a globe next to books on a table. This item has the printed signatures of the Company's President. This specimen bond is RARE and highly collectible. 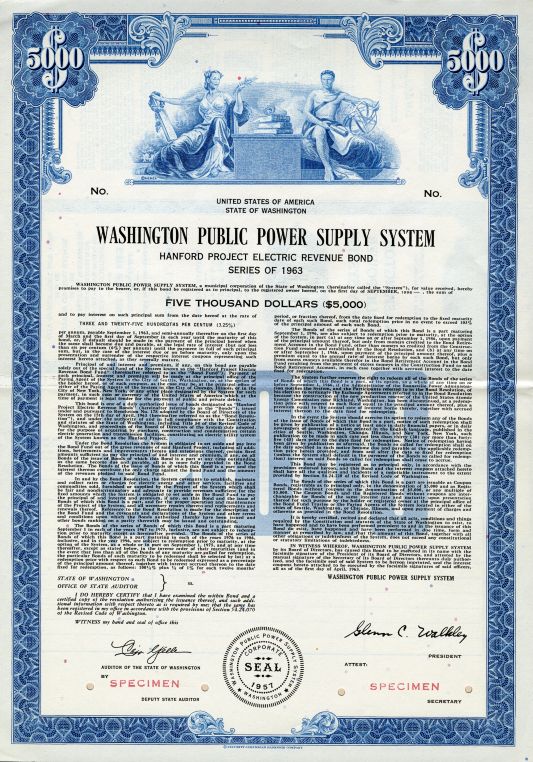 Certificate
In the 1950s, the Legislature authorized formation of joint operating agencies that allowed cities and public utility districts to join together to develop electricity generation projects. In 1957, 17 public utilities formed the Washington Public Power Supply System. The first project was the Packwood Lake Hydroelectric Project. During the 1970s, the joint operating agency began construction of three nuclear facilities, one of which is the Columbia Generating Station at Hanford, the only operating nuclear power plant generating electricity in the state. A joint operating agency is authorized to issue tax exempt revenue bonds to finance its projects. In the case of the first three nuclear power plants, revenue from the Bonneville Power Administration (BPA) was used to guarantee repayment of the revenue bonds through a system of net-billing. An IRS ruling in 1972 changed the tax exempt status of federal agencies and further net-billing agreements were prohibited. For the agency, under the regionally developed Hydro-Thermal Power Program, the 1970s brought the challenge of attempting to simultaneously construct multiple nuclear power plants. Over-commitment to nuclear power brought about the financial collapse of the Washington Public Power Supply System, which undertook to build five large nuclear power plants in the 1970s. By 1983, cost overruns and delays, along with a slowing of electricity demand growth, led to cancellation of two WPPSS plants and a construction halt on two others. Moreover, WPPSS defaulted on $2.25 billion of municipal bonds, which is still the largest municipal bond default in U.S. history. The court case that followed took nearly a decade to resolve. The WPPSS acquired the nickname "Whoops" in the media. In January 1982, the WPPSS board stopped construction on Plants 4 and 5 when total cost for all the plants was projected to exceed $24 billion. Because these plants generated no power and brought in no money, the system was forced to default on $2.25 billion in bonds. This meant that the member utilities, and ultimately the rate payers, were obligated to pay back the borrowed money. In some small towns where unemployment due to the recession was already high, this amounted to more than $12,000 per customer. The bond holders sued and the matter wound it way through courts for the next 13 years. Plants 1 and 3 were never finished either, but their costs were backed by the Bonneville Power Administration and the power it generated from the Columbia River Dams. Plant 2 at Hanford was completed in 1984 and is now called the Columbia Generating Station. It produces 12 percent of the power supplied by the Bonneville Power Administration at a cost of 2.3 cents per kilowatt hour. Seattle customers pay an average of 3.89 cents per kilowatt hour. The unfinished plants were mothballed against the possibility that construction would be resumed. In 1995, WPPSS decided to demolish what remained of the structures. History from Encyberpedia and OldCompany.com (old stock certificate research service) About Specimen Certificates Specimen Certificates are actual certificates that have never been issued. They were usually kept by the printers in their permanent archives as their only example of a particular certificate. Sometimes you will see a hand stamp on the certificate that says "Do not remove from file". Specimens were also used to show prospective clients different types of certificate designs that were available. Specimen certificates are usually much scarcer than issued certificates. In fact, many times they are the only way to get a certificate for a particular company because the issued certificates were redeemed and destroyed. In a few instances, Specimen certificates were made for a company but were never used because a different design was chosen by the company. These certificates are normally stamped "Specimen" or they have small holes spelling the word specimen. Most of the time they don't have a serial number, or they have a serial number of 00000. This is an exciting sector of the hobby that has grown in popularity over the past several years.