Beautiful engraved RARE specimen certificate from the Amazon.Com printed in 1996. This historic document was printed by the United States Banknote Corporation and has an ornate block border with a vignette of the old company logo. The newer certificates have the company's latest logo. This item has the printed signatures of the company's officers, including Jeff Bezos as president and Chief Executive Officer and CFO, Joy Covey. This is only the second Amazon specimen certificate we have had for sale with the old logo. 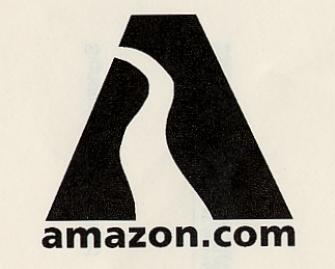 History Jeff Bezos was researching the Internet in the early 1990s for hedge fund D.E. Shaw. He realized that book sales would be a perfect fit with e-commerce because book distributors already kept meticulous electronic lists. Bezos, who as a teen had dreamed of entrepreneurship in outer space, took the idea to Shaw. The company passed on the idea, but Bezos ran with it, trekking cross country to Seattle (close to a facility owned by major book distributor Ingram) and typing up a business plan along the way. Bezos founded Amazon.com in 1994. After months of preparation, he launched a Web site in July 1995 (Douglas Hofstadter's Fluid Concepts and Creative Analogies was its first sale); it had sales of $20,000 a week by September. Bezos and his team kept working with the site, pioneering features that now seem mundane, such as one-click shopping, customer reviews, and e-mail order verification. Amazon.com went public in 1997. Moves to cement the Amazon.com brand included becoming the sole book retailer on America Online's public Web site and Netscape's commercial channel. In 1998 the company launched its online music and video stores, and it began to sell toys and electronics. Amazon.com also expanded its European reach with the purchases of online booksellers in the UK and Germany, and it acquired the Internet Movie Database. Bezos also expanded the company's base of online services, buying Junglee (comparison shopping) and PlanetAll (address book, calendar, reminders). By midyear Amazon.com had attracted so much attention that its market capitalization equaled the combined values of profitable bricks-and-mortar rivals Barnes & Noble and Borders Group, even though their combined sales were far greater than the upstart's. Late that year Amazon.com formed a promotional link with Hoover's, publisher of this profile. After raising $1.25 billion in a bond offering early in 1999, Amazon.com began a spending spree with deals to buy all or part of several dot-coms. However, some have since been sold (HomeGrocer.com) and others have gone out of business or bankrupt -- Pets.com, living.com (furniture). It also bought the catalog businesses of Back to Basics and Tool Crib of the North. Amazon.com began conducting online auctions in early 1999 and partnered with venerable auction house Sotheby's. Also that year Amazon.com added distribution facilities, including one each in England and Germany. In 2000 Amazon.com placed a link to drugstore.com on its homepage; drugstore.com will pay more than $100 million for that access. In 2000 Amazon.com inked a 10-year deal with toysrus.com to set up a co-branded toy and video game store. Also that year Amazon.com added foreign-language sites for France and Japan. In January 2001 Amazon.com announced plans to restructure and lay off 15% of its workforce; the plan, resulting from the need to show a profit, forced a $150 million charge. In April 2001 the company announced a deal with Borders to provide inventory, fulfillment, content, and customer service for borders.com. In July 2001 America Online invested $100 million in Amazon.com as part of a deal to expand their marketing partnership

The following was from the company's prospectus in 1996:

About Specimens Specimen Certificates are actual certificates that have never been issued. They were usually kept by the printers in their permanent archives as their only example of a particular certificate. Sometimes you will see a hand stamp on the certificate that says "Do not remove from file". Specimens were also used to show prospective clients different types of certificate designs that were available. Specimen certificates are usually much scarcer than issued certificates. In fact, many times they are the only way to get a certificate for a particular company because the issued certificates were redeemed and destroyed. In a few instances, Specimen certificates we made for a company but were never used because a different design was chosen by the company. These certificates are normally stamped "Specimen" or they have small holes spelling the word specimen. Most of the time they don't have a serial number, or they have a serial number of 00000. This is an exciting sector of the hobby that grown in popularity over the past several years.