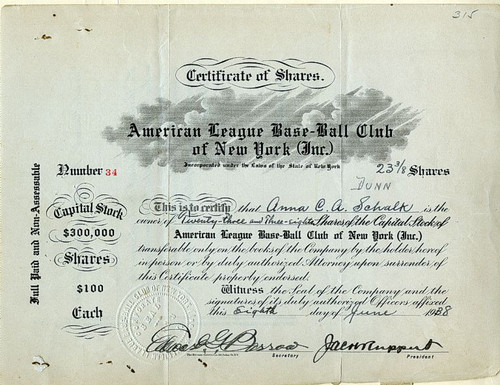 Rare stock certificate from the <font color="#0000FF">American League Baseball Club of New York</font> issued in 1938. This historic document has a vignette of the company's name in clouds. This item has the signatures of the Company’s president, Jacob Ruppert and Secretary, Ed Barrow and is over 84 years old.  The certificate was issued to Anna C. A. Schalk (Became Anna C. A. Dunn) 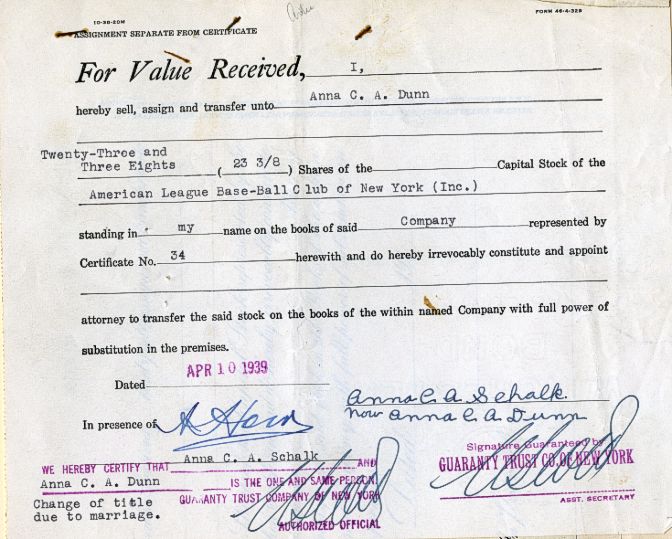 Jacob Ruppert Jr. (August 5, 1867 – January 13, 1939) was an American brewer, businessman, National Guard colonel and politician who served for four terms representing New York in the United States House of Representatives from 1899 to 1907. He also owned the New York Yankees of Major League Baseball from 1915 until his death in 1939.

Apr, 1913 The Highlanders are officially renamed the "Yankees" after moving to the Polo Grounds, home of the National League's New York Giants.


May 5, 1922 Construction begins on Yankee Stadium.

The 1938 New York Yankees season was their 36th season. The team finished with a record of 99–53, winning their 10th pennant, finishing 9.5 games ahead of the Boston Red Sox. New York was managed by Joe McCarthy. The Yankees played their home games at Yankee Stadium. In the 1938 World Series, they beat the Chicago Cubs in 4 games. This marked the first time any team had won three consecutive World Series.

During the waning days of World War II, ownership of the New York Yankees transitioned—Dan Topping, Del Webb, and Larry MacPhail grouped to purchase the Yankees on January 26, 1945 from the heirs of Colonel Jacob Ruppert.  $2.75 million changed hands for 86.88 per cent, according to the New York Herald Tribune‘s Rud Rennie, who also reported that team president Ed Barrow sold his 10 per cent interest to the Topping-Webb-MacPhail trio for “an estimated $250,000.”  Ruppert’s brother George, nephew Ruppert Schalk, and niece Anna Dunn owned the remaining 3.12 per cent.

The greatest sports dynasty in American history began with a second-division team in the country’s premier city.

Jacob Ruppert changed all that when he bought the New York Yankees in 1915. Baseball has never been the same.

“For $450,000, we got an orphan ballclub,” said Ruppert, who purchased the team with Tillinghast Huston. “(The club was) without a home of its own, without players of outstanding ability, without prestige.”

Within a decade, Ruppert had built Yankee Stadium, acquired Babe Ruth and won the first of the franchise’s World Series titles.

Born Aug. 5, 1867, in New York City, Ruppert was the son of Jacob Ruppert Sr., who owned the Ruppert Brewery. At age 19, Ruppert began work at the brewery, and by age 31 he was elected to the first of four terms as a United States Congressman from New York’s 15th District. He chose not to run again in 1906, instead becoming a colonel in the Seventh Regiment of the National Guard.

Ruppert inherited the brewery upon his father’s death in 1915. That same year, Frank Farrell and William Devery, the original owners of the American League’s entry in New York City, decided to sell the club to Ruppert and Huston.

After the Yankees finished no better than fourth in Ruppert’s first three years as owner, Ruppert hired manager Miller Huggins on the advice of American League president Ban Johnson. Two years later, Ruppert bought Ruth from the Red Sox – the American League’s best team of the second decade of the 20th Century – for a record $125,000.

In Ruth’s first year with the Yankees – 1920 – the Sultan of Swat obliterated the big league home run record by smashing 54 long balls. The Yanks won a team-record 95 games that year and drew almost 1.3 million fans to the Polo Grounds, more than doubling their previous attendance mark.

During the next three seasons, the Bronx Bombers won three AL pennants and a World Series title – capping off 1923, the year Ruppert opened Yankee Stadium and bought the club outright from Huston, by winning the franchise’s first Fall Classic.

Ruppert would guide the Yankees to seven more AL flags and six more World Series titles before his death on Jan. 13, 1939. As the 71-year-old Ruppert lay dying in Lenox Hill Hospital, Ruth – at that point retired as a player and a soon-to-be enshrined Hall of Famer – visited him at his bedside.

“It was the only time in his life he ever called me ‘Babe’ to my face,” said George Herman Ruth, whose salary disputes with Ruppert over the years drew much press coverage. “I couldn’t help crying when I went out.”

On April 16, 1940, the Yankees dedicated a plaque in Ruppert’s memory that now rests in Monument Park in Yankee Stadium.

“Gentleman, American, sportsman, through whose vision and courage this imposing edifice, destined to become the home of champions, was erected and dedicated to the American game of baseball.”

Ruppert was elected to the Hall of Fame in 2013.