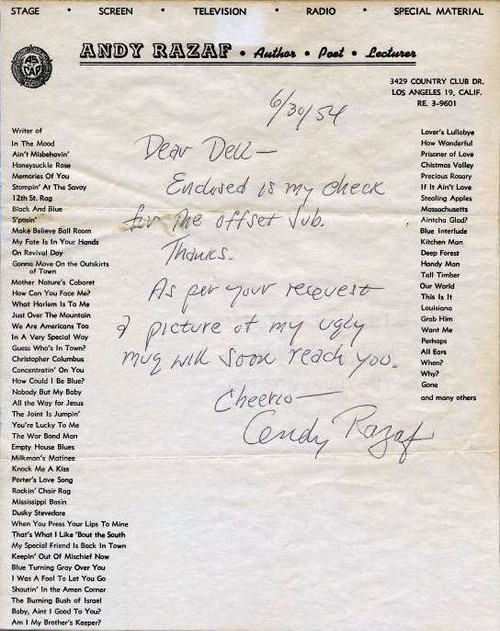 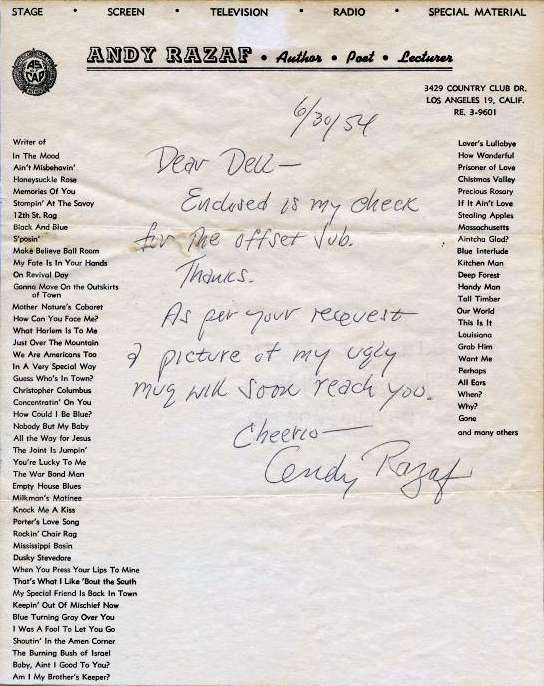 Andy Razaf autographed letter
Razaf was born in Washington, D.C. His birth name was Andriamanantena Paul Razafinkarefo. He was the son of Henri Razafinkarefo, nephew of Queen Ranavalona III of Imerina kingdom in Madagascar, and Jennie (Waller) Razafinkarefo, the daughter of John L. Waller, the first African American consul to Imerina. The French invasion of Madagascar left his father dead, and forced his pregnant 15-year-old mother to escape to the United States, where he was born in 1895. He was raised in Harlem, Manhattan, and at the age of 16 he quit school and took a job as an elevator operator at a Tin Pan Alley office building. A year later he penned his first song text, embarking on his career as a lyricist. During this time he would spend many nights in the Greyhound bus station in Times Square and would pick up his mail at the Gaiety Theatre office building which was considered the black Tin Pan Alley. Some of Razaf's early poems were published in 1917-18 in the Hubert Harrison-edited Voice, the first newspaper of the "New Negro Movement". Razaf collaborated with composers Eubie Blake, Don Redman, James P. Johnson, Harry Brooks, and Fats Waller. Among the best-known Razaf-Waller collaborations are "Ain't Misbehavin'", "Honeysuckle Rose", "The Joint Is Jumpin'", "Willow Tree", "Keepin' Out of Mischief Now" and "(What Did I Do to Be So) Black and Blue". His music was played by other Tin Pan Alley musicians, as well as Benny Goodman, Eubie Blake, Cab Calloway and many others. He was a contributor and editor of the Universal Negro Improvement Association and African Communities League's Negro World newspaper. He also wrote quite a number of raunchy 'character' blues-type songs for many of the women blues singers of the 1920s. He also made a number of records as vocalist (both as solo and as vocalist for jazz groups, including a handful by James P. Johnson and Fletcher Henderson). In 1972, Razaf was recognized by his Tin Pan Alley peers in the Songwriters Hall of Fame. The Songwriters Hall of Fame entry on Andy Razaf lists 215 compositions, giving co-writers and publishers.[3] He had many unpublished songs; Singer's biography lists more than 800, published and unpublished (but without giving lyrics). Some notable lyrics include: "Baltimo"', composed at the age of 17, was sung by members of The Passing Show of 1913 at Winter Garden, New York. "Mound Bayou" The original song was sung by Maxine Sullivan, and was on an album dedicated to his work, A Tribute to Andy Razaf. "Ain't Misbehavin'" "Black and Blue" "Garvey! Hats Off to Garvey" "Honeysuckle Rose" "In the Mood" "The Joint Is Jumpin'" "Keepin' Out of Mischief Now" "Louisiana" "Stompin' at the Savoy" "That's What I Like about The South" "U.N.I.A." Andy Razaf died in North Hollywood, California on February 3, 1973. History from Wikipedia, Encyberpedia and OldCompany.com (old stock certificate research service)