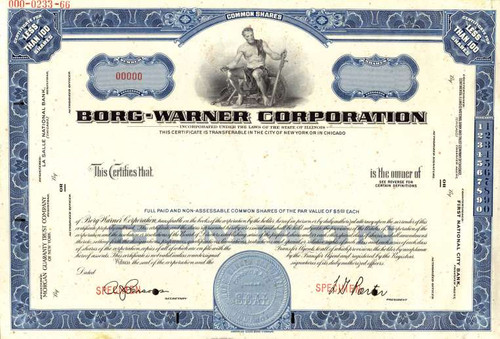 Beautifully engraved specimen stock certificate from the Borg Warner Corporation printed in 1966. This historic document was printed by the American Banknote Company and has an ornate border around it with a vignette of an allegorical man sitting on a bench in front of gears and machinery This item has the printed signatures of the Company's officers. 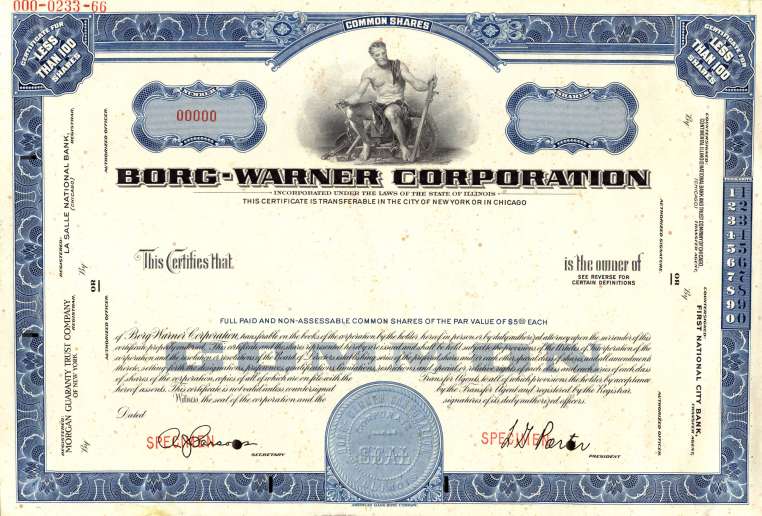 Certificate
BorgWarner Inc. is a United States-based worldwide automotive industry components and parts supplier. It is primarily known for its powertrain products, which include manual and automatic transmissions and transmission components, such as electro-hydraulic control components, transmission control units, friction materials, and one-way clutches), turbochargers, engine valve timing system components, along with four-wheel drive system components. The company has 60 manufacturing facilities across 18 countries, including the U.S., Canada, Europe, and Asia. It provides drivetrain components to all three U.S. automakers, as well as a variety of European and Asian original equipment manufacturer (OEM) customers. BorgWarner has diversified into several automotive-related markets (1999), including ignition interlock technology (ACS Corporation est.1976) for preventing impaired operation of vehicles. Historically, BorgWarner was also known for its ownership of the Norge appliance company (washers and dryers). History from Encyberpedia and OldCompany.com (old stock certificate research service) About Specimen Certificates Specimen Certificates are actual certificates that have never been issued. They were usually kept by the printers in their permanent archives as their only example of a particular certificate. Sometimes you will see a hand stamp on the certificate that says "Do not remove from file". Specimens were also used to show prospective clients different types of certificate designs that were available. Specimen certificates are usually much scarcer than issued certificates. In fact, many times they are the only way to get a certificate for a particular company because the issued certificates were redeemed and destroyed. In a few instances, Specimen certificates were made for a company but were never used because a different design was chosen by the company. These certificates are normally stamped "Specimen" or they have small holes spelling the word specimen. Most of the time they don't have a serial number, or they have a serial number of 00000. This is an exciting sector of the hobby that has grown in popularity over the past several years. ----------------------------------------------