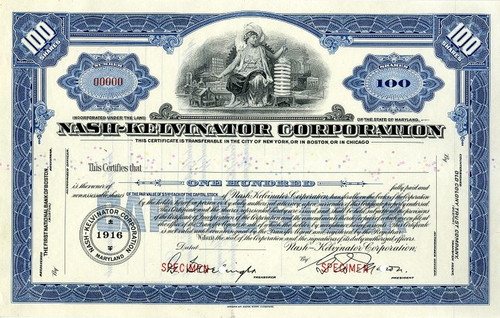 Beautifully engraved certificate from the Nash Kelvinator Corporation issued in 1949. This historic document was printed by the American Banknote Company and has an ornate border around it with a vignette of an allegorical woman in front a coil and a manufacturing facility . This item has the printed signature of the company's president, George W. Mason and is over 70 years old. 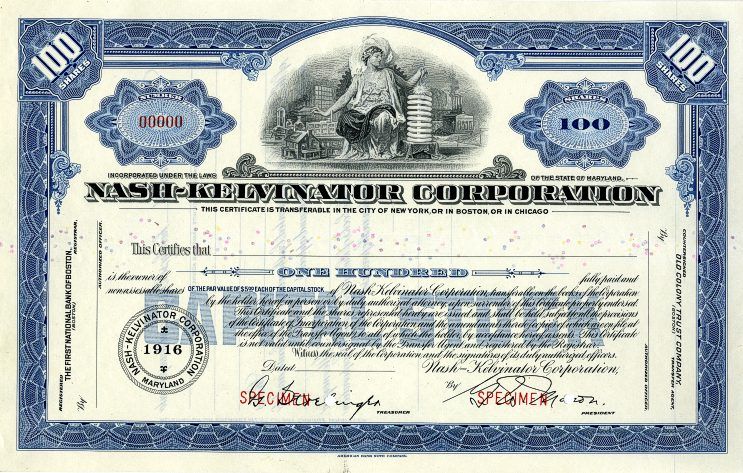 Certificate Vignette
Nash-Kelvinator Corporation was the result of a merger between Nash Motors and Kelvinator Appliance Company. The union of these two companies was brought about as a result of a condition made by George W. Mason prior to his appointment as CEO of Nash. In the 1952 Kelvinator introduced the Kelvinator Food-A-Rama Side by Side Refrigerator (http://www.antiqueappliances.com/treasures/1952Kelvinator.htm), one of the earliest modern side-by-side frost free refrigerators. Kelvinator consumer products, prior to and after the merger with Nash, were considered an up market brand of household appliances. The Kelvinator brand was eventually sold to White Consolidated Industries which bought the product under its corporate appliance group joining the White-Westinghouse, Gibson and Frigidaire appliance brands. The appliance division of White Consolidated Industries is now part of Sweden's Electrolux Corporation. The Kelvinator product brand is applied to household appliances worldwide, as well as scientific refrigerator systems. History from Wikipedia and OldCompany.com (old stock certificate research service) About Specimen Certificates Specimen Certificates are actual certificates that have never been issued. They were usually kept by the printers in their permanent archives as their only example of a particular certificate. Sometimes you will see a hand stamp on the certificate that says "Do not remove from file". Specimens were also used to show prospective clients different types of certificate designs that were available. Specimen certificates are usually much scarcer than issued certificates. In fact, many times they are the only way to get a certificate for a particular company because the issued certificates were redeemed and destroyed. In a few instances, Specimen certificates were made for a company but were never used because a different design was chosen by the company. These certificates are normally stamped "Specimen" or they have small holes spelling the word specimen. Most of the time they don't have a serial number, or they have a serial number of 00000.