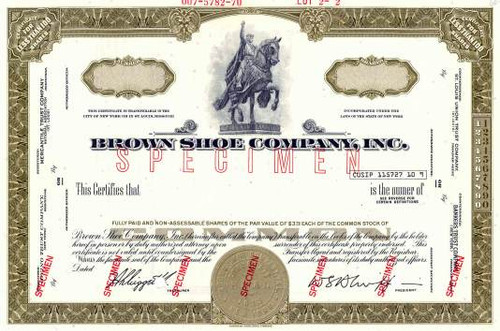 Beautifully engraved SCARCE SPECIMEN certificate from the Brown Shoe Company, Inc. This historic document was printed by the American Banknote Company and has an ornate border around it with a vignette of a man on a horse. This item has the printed signatures of the Company's President and Treasurer. 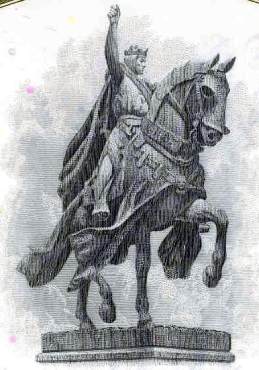 Certificate Vignette
In 1904 at the "Meet Me In St. Louis" World's Fair, a young Brown Shoe executive met Buster Brown's creator, cartoonist Richard F. Outcault, and purchased the name from him. At the time, Buster Brown was a mischievous cartoon character, who, together with his dog Tige and sister Mary Jane, delighted children of all ages. Brown Shoe made marketing history when it sent on the road a series of midgets, each dressed as Buster and accompanied by a dog (Tige). They toured the entire country selling Buster Brown shoes as they performed in theaters, department stores and shoe stores. In those days, such a touring show generally brought out the whole town.