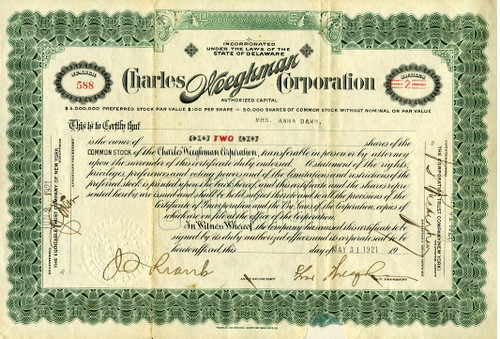 Beautifully engraved certificate from the Charles Weeghman Corporation issued in 1921. This historic document was printed by Franklin Lee Division-American Banknote Company and has an ornate border around it with a vignette of the company's name on top center. This item is hand signed by the Company's President, Charles Weeghman and Secretary and is over 98 years old. Professionally reinforced on small portion on margin on bottom. Certificate was issued to Anna Damm, but there is no Damm signature on the back. Chicago's professional baseball team was known by several names before settling on the Cubs by 1908. The Cubs were World Champions that year and played at the West Side Grounds on Taylor Street, near what is now the location of the UIC Medical Center. Meanwhile, in 1913 restauranteur Charles Weeghman bought the ChiFeds (a.k.a. the Whales), Chicago's team in the newly created Federal Baseball League, and he immediately began work on building a Federal League ballpark on land acquired at the intersection of Clark and Addison. Weeghman Park, as it was called, opened on April 23, 1914 and was home to the ChiFeds until the Federal League went bankrupt at the end of the 1915 season. As part of his settlement, Weeghman on January 20, 1916 was able to buy a controlling interest in the Cubs along with several other investors, including William Wrigley, Jr., founder of the Wrigley chewing gum company. Charles Weeghman promply moved the team from the West Side Grounds to Weeghman Park. Professionally reinforced on bottom margin. Three months later, on April 20, the Cubs beat the Reds, 7-6, in the first NL game at Weeghman Park. Chewing gum magnet William Wrigley bought out the remainder of Charles Weeghman's share of the club. In 1926, Weeghman Park was renamed Wrigley Field. History from Wikipedia and OldCompany.com (old stock certificate research service)