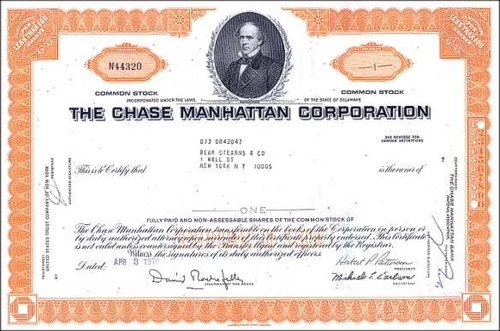 Beautifully engraved certificate from the Chase Manhattan Bank Corporation issued no later than 1971. This historic document was printed by the American Banknote Company and has an ornate border around it with a vignette of Salmon Chase. This item has the printed signatures of the Company's officers including David Rockefeller as Chairman of the Board. 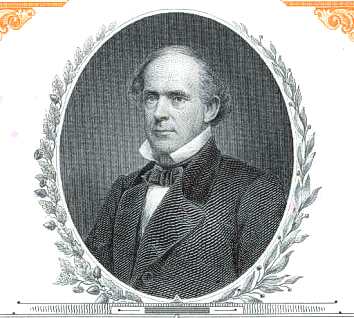 Certificate Vignette
Salmon Portland Chase (1808 - 1873) is remembered for his abilities as the man who hated slavery, suffering both personal and financial losses but continuing to be committed that slavery was a sin, as a senator who organized the Republican party; a governor who ahead of his time did not believe capital punishment was a deterrent to crime and improved the State of Ohio correctional facilities; as a Treasury Secretary with a small amount of specie in the treasury to finance a war that was not supposed to last as long as it did. David Rockefeller served as an officer of the Chase Manhattan Bank from 1946 to 1981. He was Chairman and Chief Executive Officer from 1969 until 1980, and continued as Chairman until his retirement in 1981. Since that date he has been Chairman of the bank's International Advisory Committee. Mr. Rockefeller has also been involved in numerous other business, cultural and educational organizations. Chase in now the retail financial services franchise within JPMorgan Chase. The merger of The Chase Manhattan Corporation and J.P. Morgan & Co. Incorporated was completed on December 31, 2000.