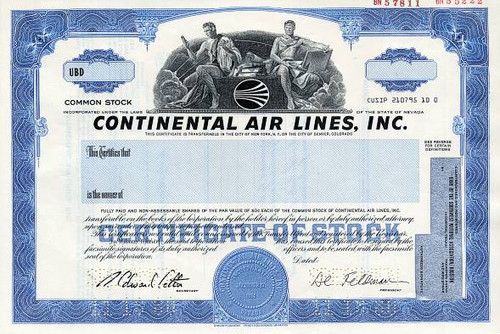 Beautiful RARE specimen certificate from Continental Air Lines, Inc. printed prior to 1981. This historic document was printed by the Security - Columbian Company and has an ornate border around it with a vignette of an two allegorical men above the clouds measuring stars with the company logo in between them. This item has the printed signatures of the Company's President, Alvin Feldman and Secretary on the Blue Certificate or Robert Six on the Green Certificate. We have one of each type.

"Boy, did I get the Wrong Number" Package - Worldcom, Global Crossing and XO Communications