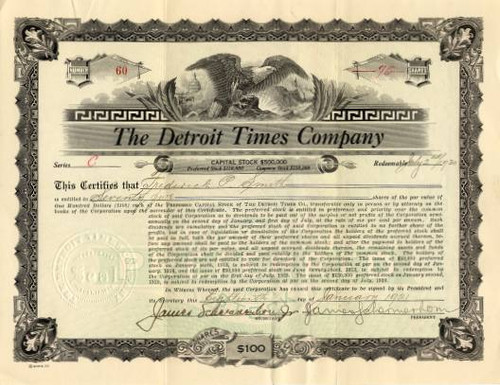 Beautifully engraved certificate from the Detroit Times Company issued in 1921. This historic document has an ornate border around it with a vignette of eagle standing on a rock. This item is hand signed by the Company's President (James Schermerhorn) and Secretary (James Schermerhorn Jr) and is over 85 years old. This is the first time we have had this certificate for sale.

Certificate Vignette
James Schermerhorn was born in Hudson, Mich., his early education being obtained in the public schools at Hudson, and the preparatory department of Oberlin College. In 1884 he won a West Point cadetship in a competitive examination, but on account of the death of his father at the close of that year and the failing health of his elder brother, his resignation was made necessary, and he returned to Hudson to assist in the maintaining of the Hudson Gazette, his father's paper. He ran this paper until 1895, when he turned it over to his younger brothers. Soon after this he went to Detroit, and after five years' experience as advertising solicitor, reporter, Washington correspondent and editorial writer in Detroit, he established his own newspaper, calling it first To-Day, and later, The Times. The Times is a newspaper conducted with high journalist-ideals and is highly thought of in the community where it is well known. James Schermerhorn had been called to nearly every large city of the country to expound his conception of journalistic and advertising ethics. He had addressed the National Convention of the Associated Advertising Clubs of America several times, -- at Louisville in 1909, in Boston in 1911 and in Dallas, Texas, in 1912. In 1914, he was the president of the Michigan Press Association, superintendent of the First Congressional Sunday School and member of the State Executive Committee of the Y. M. C. A. William Randolph Hearst bought the Detroit Times in 1921.