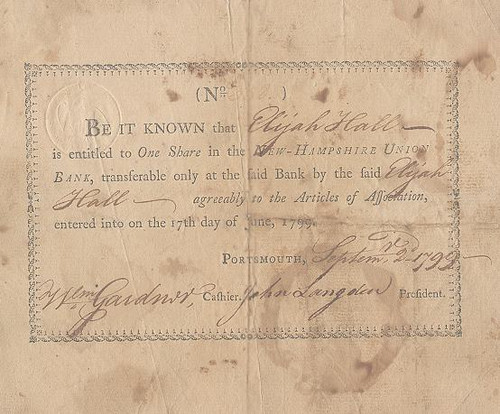 Beautifully engraved Certificate from the New Hampshire Union Bank issued in 1799. This historic document is hand signed by John Langdon (signer of U.S Constitution), William Gardner and Elijah Hall. You won't find many 18th century U.S. Stock Certificates, let alone one signed by an original signer of the U.S. Constitution. This document is an important piece of American business history that is over 201 years old. This is the only stock certificate we know that has been signed by John Langdon. This rare early stock certificate reads as follows: No. 358. "BE IT KNOWN that Elijah Hall is entitled to One Share in the NEW - HAMPSHIRE UNION BANK, transferable only at the said Bank by said Elijah Hall agreeable to the Articles of Association, entered into on the 17th day of June, 1799. PORTSMOUTH, September 2, 1799" it is Signed by: "Wm. Gardner(Cashier.)" & "John Langdon,(President.)" It measures 6 1/2" by 7 5/8" it is on a very thin laid watermarked paper that has a circular seal design with a crown on the top. It is also embossed in the upper left hand corner with an eagle with shield at its chest tax seal that reads, "TWENTY FIVE CENTS NEW HAMPSHIRE".

This is an early embossed tax stamp: 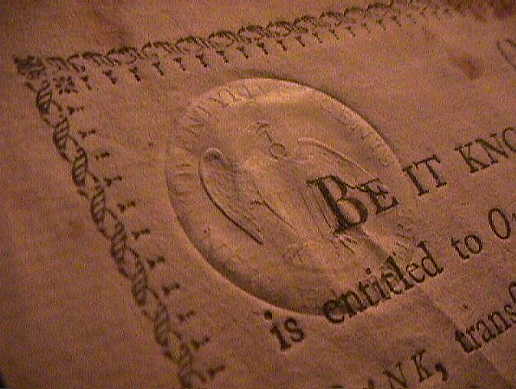 It also has a beautiful early watermark as shown below: 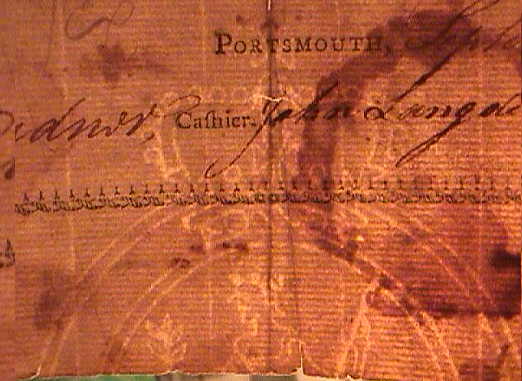 Langdon, John (1741-1819) A HISTORIAN ONCE SAID that the history of New Hampshire from the beginning of the Revolutionary War until the beginning of the nineteenth century was little more than the history of John Langdon. While that is an overstatement, few other men were as influential in both state and national politics as was Langdon. On December 14, 1774, he became one of the first prominent Americans to risk hanging when he led the raid on Fort William and Mary. New Hampshire's John Langdon was the first acting vice-president of the United States, and was President of the Senate when Washington was elected first president. From that day until 1812 when he retired from public life, Langdon remained a dominant political figure. Below is a copy of the U.S. Constution where John Langdon was one of the original signers: 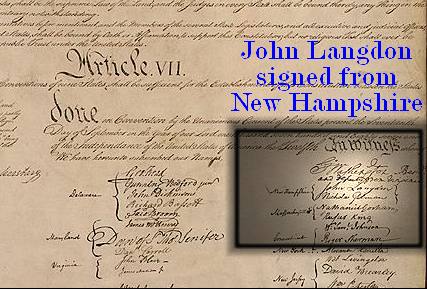