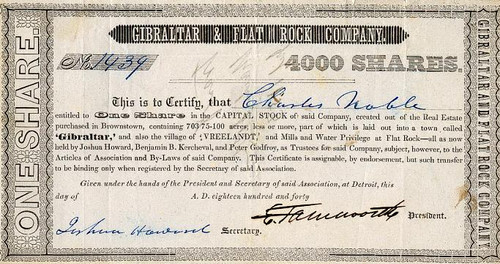 Beautiful RARE certificate from the Gibraltar & Flat Rock Company issued in 1840. This item has the signatures of the Company's President, E. Tamworth and Secretary, Joshua Howard and is over 173 years old. Peter Godfroy, Benjamin B. Kerchival, and Joshua Howard, all Trustees of the Gibraltar & Flat Rock Company and their names are printed on the certificate as such. 6 1/2" x 3 1/2". EF Condition. 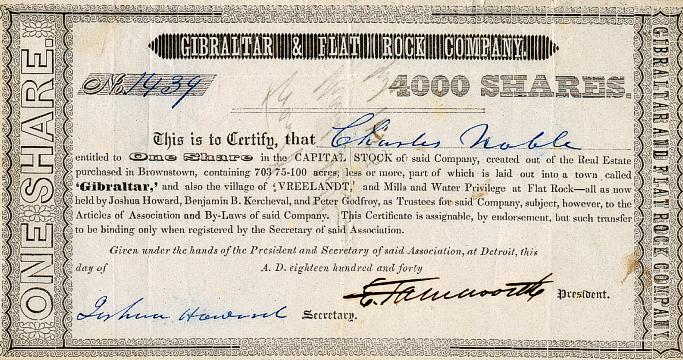 Certificate
This certificate was issued for capital stock to fund the purchase of land in the town of "Gibraltar" and around the village of "Vreelandt", Michigan. Gibraltar and Flat Rock are located just south of Detroit along Lake Erie. Vreelandt was a small village located just north of Gibraltar according to an early 1800's map. Gibraltar, Michigan This land was first settled, by Peter Godfroy, Benjamin B. Kerchival and Colonel Joshua Howard, trustees of the Gibralter & Flat Rock Company in 1811, it was platted and recorded on March 14, 1837. On October 2, 1837 Amos Dunbar became the first postmaster of Gibralter on October 2, 1837. The office was renamed Woodbury on December 8, 1838, but was changed back to Gibralter on May 13, 1839, with the spelling changed to Gibraltar on December 19, 1900. It remained that way until the office was closed on January 31, 1910. The village didn't prosper until it was revived by the suburban boom. It was incorporated as a village in 1954, and as a city in 1961 The earliest residents in this area of Michigan, were the Wyandots (or Huron) Native Americans. They were under French control until the British captured Detroit in 1760. The early tribes used Gibraltar as the "Head Village." It was the headquarters of the Council House and the International Council Fires. Since the Wyandot were always a leading tribe in the Northwest Territory, the Great Council of the Confederacy was also held here. The area was called, "Chenal de la Presque Isle" on early French maps. This roughly translates into "Channel of the near (or almost near) Island." The theory is that when the English began to settle in the area, they called it Gibraltar, which in their opinion, was the greatest rock of all. When original land plats were registered for the area, the spelling was "Gibralter." It was not until the year 1900, that the spelling was changed to "Gibraltar," which is the current spelling of today. The Brownstown Treaty was signed in 1807, which opened up the southeastern portion of Michigan for survey, settlement, and new roads. West Jefferson Road follows along an old Native American trail traveling from Ohio to the north. It is said that in the spring, Native American families were travel north and leave their mares on what is now called Horse Island, to foal. The horses would live the summer on this island to feed and mate, and were picked up by the Natives on their return trip south, in the fall. The Native American tribes took advantage of the abundance of reeds for making baskets, and for the good hunting and fishing in the area. Following the successful opening of the Erie Canal in 1825, local entrepreneurs had also invisioned builing such a canal to go from Gibraltar to Lake Michigan. The Gibralter-Flat Rock Land and Canal Company was organized on July 20, 1836, for this purpose. Their plans were to build a canal between Gibraltar and Flat Rock, extending to Ypsilanti, with an ultimate goal of reaching Muskegon. The offices of the Canal Company were located on the second floor of the two-and-a-half story hotel in Gibraltar. Two leaders associated with this enterprise were Lewis Cass, former Governor, and Daniel Webster, a renowned orator and national political figure of that time. Lewis Cass, who lived in Detroit, and Daniel Webster were invited to Gibraltar to discuss the details and deliver speeches from the hotel explaining the great benefits this canal would bring to Michigan. Webster announced he would personally acquire $20,000 of Canal Company stock. The Gibralter-Flat Rock Land and Canal Company actually filled the area with a number of its settlers. It was widely advertised and created a great confidence with the pioneers that lots were sold for $5,000 or more. Dredging did begin along the Huron River, however the project failed in 1838. Gibraltar, was platted and recorded on March 14, 1837, by Peter Godfroy, Benjamin B. Kerchival, and Joshua Howard, all Trustees of the Land and Canal Company. Amos Dunbar became the first Postmaster on October 2, 1837. The post office was renamed, Woodbury on December 8, 1838, but was named back to Gibraltar by May 13, 1839. History from Wikipeida and OldCompanyResearch.com.