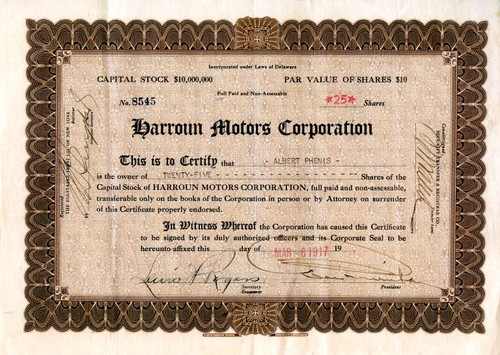 Beautifully engraved certificate from the Harroun Motors Corporation issued in 1917. This historic document was printed by the Columbian Banknote Company and has an ornate border around it with a vignette of the company's name. This item has the hand signatures of the Company's President, John Guy Monihan and Secretary, Lewis Hopkins Rogers. 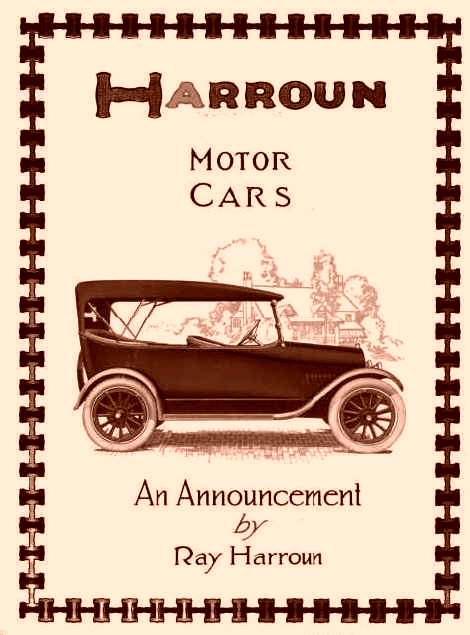 Harroun Motors Ad shown for illustrative purposes
Harroun Motors Corporation was founded by the famous Ray Harroun to build an automobile company. Harroun was the first driver to win the Indianapolis 500 in 1911. The Harroun Motors Corporation was organized in 1916 with authorized capital of $10,000,000. John Moniham, formerly with Premier and Marion automobile companies, was the president. The company was located in Wayne, MI, and 24,000 cars a year were the estimated production, with 500 being done before the end of the year. The 1922 model was the last year for the Harroun automobile. John Guy Monihan - The Horseless Age, Volume 40 - 1917 As president and general manager of the Harroun Motors Corporation, John Guy Monihan has made telling use of all the wisdom he had acquired as a, newspaper man, a publisher, an automobile distributor and a factory executive. Away back in 1911, soon after Mr. Monihan had piloted those hardy pioneers of trans-continental touring from ocean to ocean, and while Mr. Harroun was developing his oil carburetor, the two friends were talking motor cars and motor car shortcomings. "John, I'm going to design a car some day that will be right," declared the little Bedouin of the Speedway. "Let me know when you're ready and I'll organize the company to build it," replied Monihan. They shook hands on the compact and though their paths soon separated, neither man forgot. Last summer Monihan received a telegram over Harroun's signature. "Car is ready; I need you," it read. Monihan came on the next train, to begin a feat of organization and development of The Harroun Motors Corporation which will be recorded in the history of motordom as an extraordinary accomplishment--Ã¶ a feat to which he brought an ideal experience, a preparation of many years and a tremendously agile brain. His headquarters are at 2641 Michigan Avenue. History from Encyberpedia and OldCompany.com (old stock certificate research service)