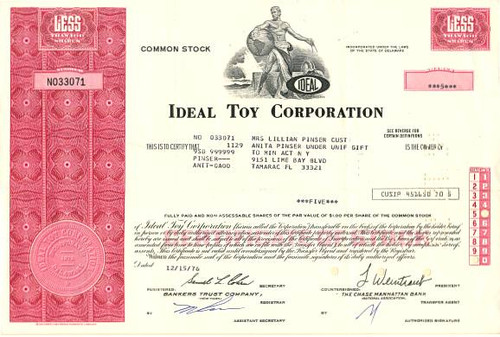 Beautifully engraved certificate from the Ideal Toy Corporation issued in 1976. This historic document was printed by Security-Columbian Banknote Company and has an ornate border around it with an vignette of an allegorical man holding a globe. This item has printed signatures by the Company's President and Secretary and is over 28 years old.

Certificate Vignette
The event which led to the creation of the Teddy Bear occurred near Onward, in 1902, when President Theodore Roosevelt, acting upon the suggestion of some friends, visited the state on a hunt for wild game. A bear was located by a member of the hunting party for the President. The bear was exhausted and possibly lame, some claim it was a mere cub. In any case, Roosevelt refused to shoot the helpless bear because he found it unsporting. News of the President's refusal to shoot the bear spread far and wide. Soon after, Morris Michtom, a New York merchant, made toy history when he created a stuffed toy bear and labeled it "Teddy's Bear. " Mr. Michtom placed the bear in the window of his candy store to draw attention. His success was so great that it led to the formation of the Ideal Toy Corporation in 1903. The Teddy Bear continues to be a favorite toy of children everywhere.