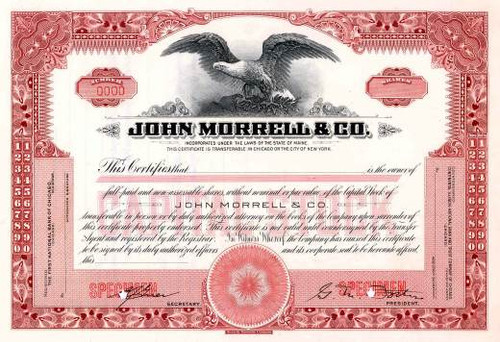 Beautifully engraved SPECIMEN certificate from the John Morrell & Co. This historic document was printed by the Security Banknote Company and has an ornate border around it with a vignette of an eagle. This item has the printed signatures of the Company's President and Secretary.

Certificate Vignette
John Morrell is a wholly owned and independently managed subsidiary of Smithfield Foods, which is the largest vertically integrated producer of processed meat and fresh pork in the United States. John Morrell & Co. owns four subsidiary companies: Curly's Foods, Iowa Quality Meats, Mohawk Packing Company, and Saratoga Specialties. We offer an extensive product line of processed meats and fresh pork to consumers under thirteen regional brands. The company brands include John Morrell, E-Z-Cut, Tobin's First Prize, Dinner Bell, Hunter, Kretschmar, Rath, Rodeo, Shenson, Farmers Hickory Brand, Iowa Quality, and Peyton's. Each regional brand enjoys high brand recognition and loyalty among consumers. About Specimens Specimen Certificates are actual certificates that have never been issued. They were usually kept by the printers in their permanent archives as their only example of a particular certificate. Sometimes you will see a hand stamp on the certificate that says "Do not remove from file". Specimens were also used to show prospective clients different types of certificate designs that were available. Specimen certificates are usually much scarcer than issued certificates. In fact, many times they are the only way to get a certificate for a particular company because the issued certificates were redeemed and destroyed. In a few instances, Specimen certificates we made for a company but were never used because a different design was chosen by the company. These certificates are normally stamped "Specimen" or they have small holes spelling the word specimen. Most of the time they don't have a serial number, or they have a serial number of 00000. This is an exciting sector of the hobby that grown in popularity and realized nice appreciation in value over the past several years.