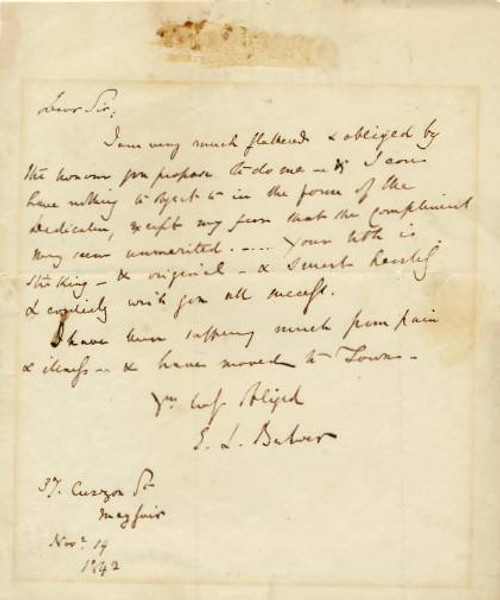 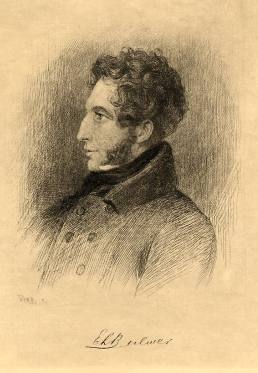 E.L. Bulwer (1811 - 1878)
The folling was written about E.L. Bulwer in 1842. Victorian London - Publications - Social Investigation/Journalism - London by Day and Night, by David W.Bartlett, 1852 - Persons of Note SIR E. L. BULWER is to be seen in town during the "season," as certain months of the year are termed by the fashionables of England. He has one of the most beautiful country-residences in England, the land above all others for fine country-seats. It is called Knebworth Park, and lies in Hertfordshire, and was the property of his mother, who was the daughter and heiress of Henry Warburton Lytton, Esq. He is the youngest son of General Bulwer, of Haydon Hall, inn the county of Norfolk, and at an early age entered the House of Commons, where he distinguished himself. He became an able political writer, but did lint allow politics to absorb all his attention. It is said that to the influence of his mother is he indebted for his early and strong love of literature. His father died while he was young, and his education was completely the work of his mother, who used to give him, while very young, old ballads to read. He entered Cambridge University at an early age, and as soon as he was through it, made a journey [-142-] of England and Scotland on foot, and afterwards wandered over France on horseback. It is somewhat singular that all the earlier works of Bulwer are now forgotten. At twenty-one or twenty-two, he commenced authorship in verse. His first novel, entitled "Falkland," is now quite forgotten. The work which first brought him prominently before the public was "Pelham," which was very successful. He is one of the most popular novelists of the age, but we can never get to believe that the effect of his earlier works is good. All his novels, save those which have been written quite lately, are altogether too feverish and passionate. Vice in them wears too pleasant a garb. No one can doubt his great power, and beauty of diction, but his powers have not always been used for the benefit of mankind. But his last novels have been of quite a different character, being delightful home-pictures, natural and without feverish and unhealthy passion. As a man, Bulwer is, and always has been, popular. Born to wealth and rank, he has worked hard as an author, and has been a true friend of authors. You can often see Dickens, and Jerrold, and Lemon and others, at Knebworth Park. He has written biographies of several of his literary friends who are now deceased, and among others one of poor Laman Blanchard, to whom he was a real friend, for in his dark days he not only comforted him with cheap words of encouragement, but with substantial British gold. He has many of the prejudices of his order; is somewhat proud, at fault inn his politics; and does not dare at all times to speak the truth. He loves popularity too well to be very far in advance of the times. He is sometimes laughed at for his excessive nicety in his dress, and when he was in the House of Commons, his political enemies named him "the fop." He is perhaps too fond of fine clothes, but that may be accounted for on the score of [-143-] his ideality. In fashionable society he is liked the better fun this failing, for he has exquisite taste. He is a fine-looking man, and is a favorite with the sex. His forehead is sloping, but broad, and polished like marble. His figure has something aristocratic in it, and as he is a genius as well as a baronet, no one can dispute his right to a lordly mien. It is when we see wealth, or rank and pride allied to that which is the opposite of genius or talent, that we are seized with a feeling of disgust. He deserves praise for having the courage and energy requisite in a man born to wealth and rank, to labor as he has done for his present fame. There were many temptations to indolence and a life of pleasure, which poor scholars never encounter, and yet he has studied diligently, and worked laboriously, for which he should have his meed of praise. We cannot refrain from saying a few words on WILLIAM MACREADY, who has taken leave of the stage forever. It was our good fortune to see him once on the boards of a London theatre, with Mrs. Fanny Kemble, in King Lear, and ever since that night we have felt a vivid interest in his personal fortunes. His public life has been a feverish one-he has seemed always to be unfortunate-and yet fortunate in securing great fame. For many years he struggled with Kean, until, as an eminent critic said, " Edmund Kean, with hands still grappling the shape-thronged air, reeled away inalf-unconsciously into the darkness.'' Then he quarrelled with his, manager, who would not listen to him in matters of taste, and at last he became a manager himself. Yet, though acknowledged to be at the head of his art, the greatest tragic actor in the world, he lost money, and was obliged to go to America to save his health, and recruit his purse. There he was mobbed. He returned to England, was enthusiastically received, and took his leave forever of the stage. While he was manager of the theatre, he completely divorced Art from licentiousness, and made the theatre a moral place - but it never paid as such. He leaves the stage in comfortable health and good pecuniary circumstances. His farewell performance at Drury Lane theatre was a scene ever to be remembered by those who were present, and the dinner given in his honor shortly after, was graced by the presence of rank, genius, and power.