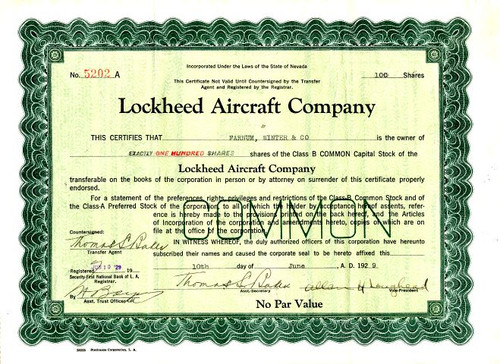 Uncancelled stock certificate from the Lockheed Aircraft Company issued in 1929. This historic document has an ornate border around it with the company's name on top center. This item is hand signed by the company's founder Allan Loughead. The certificate was issued to the Wall Street firm, Farnum, Winter & Co, who closed their doors in 1932 due to the Great Depression.

Allan Loughead's Signature
Founded in 1926 by Allan Loughead and his brother Malcolm, the company was bought by Detroit Aircraft Corporation in 1929, only to have the parent corporation file for bankruptcy in 1932. During that same year, banks Robert and Courtland Gross bought Lockheed's assets and revived the company's business with the Electra, a twin-engined all metal airliner. The advent of World War II began the company's business as a defense contractor by beginning with the P-38 Lightning bomber and continues as a primary contractor for U.S. defense aircraft as Lockheed Martin Corporation. Allan Loughead (1889 - 1969) legally changed his last name to Lockheed in order that its spelling would match its pronunciation. He worked throughout World War II in aircraft design and development. Once when asked what he did during the early days of aviation, an elderly Lockheed responded "I survived". History from Encyberpedia and OldCompany.com (old stock certificate research service)