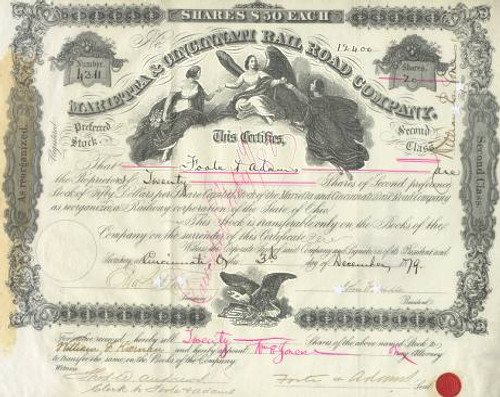 Beautifully engraved certificate from the Marietta & Cincinnati Rail Road Company issued in 1879. This historic document has an ornate border around it with beautiful vignettes of two women holding the hand of an angel,and the lower vignette showing an eagle holding a shield of the United States. This item is hand signed by the company's president, John Waddle, and its secretary and is over 121 years old. This certificate also has an embossed red seal on the bottom imprinted at the time of transfer by the bankers Foote and Adams. There is some ledger glue residue on the left margin of the certificate from the method in which the certificates were accounted for and stored. The Marietta & Cincinnati Railroad was originally chartered as the Belpre & Cincinnati Railroad in 1845. The railroad was subquently acquired by the Baltimore and Ohio Railroad. The certificate is much nicer than the scan indicates!