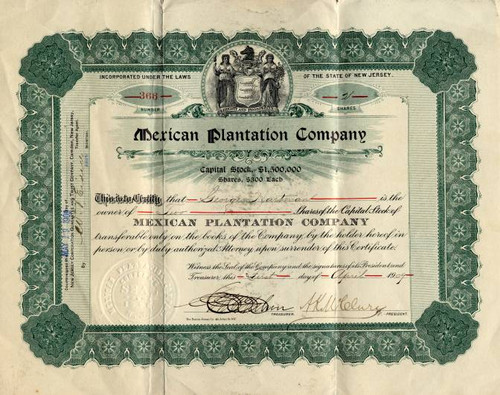 Beautiful certificate from the Mexican Plantation Company issued in 1909. This historic document has an ornate border around it with a vignette of the state seal. This item has the original signatures of the Company's Vice President, and Secretary, and is over 104 years old. 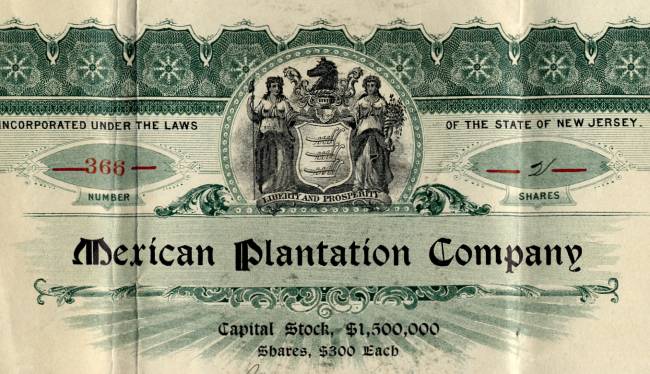 Certificate Vignette
United States Investor, Volume 14 1903 Mexican Plantation Co. Queston - Will you kindly let me know what you know of the Mexican Plantation Company, office 725 Drexel Bldg.. Philadelphia, Pa., plantation in state of Chiapas, department of Palenque, Mex.? Wm. H. Armstrong, president; C. M. McMahan, treasurer. Incorporated under the laws of New Jersey in 1899. Do you consider this company to be doing a profitable business as well as an honest one? Answer - The "Investor" answered inr quiries on this company in our issues of Feb. 8, 1902, page 278, and June 24, 1902, page 1109. On Jan. 20, 1303, the company paid five per cent dividend on the amount paid in. This is the fourth dividend paid since the company was first organized. This was derived, we understand, from quick-growing crops, principally corn. By the close of 1903 the company expects to have the whole plantation cleared and planted with permanent crops, which will Include rubber, coffee and chocolate, and other crops, such as corn, ginsrer, pineapples, etc. The company. It is said, is putting up substantial buildings on Its property for storehouses, dwellings, etc. This company is located within onu mile of the headquarters of the Chicago plantation, having had the benefit of the latter company's experiments, and a transportation company is now operated in this section and should be of considerable benefit to this company, and Increase the valuation of the Mexican Plantation Company's property. This company has not for the past two years old any stock to the general public. The stockholders have Just chosen its fourth inspector, who will soon start on his trip for a personal inspection of the plantation, and on his return, hi* report will be printed and sent to the 3tock holders. This company Is very advantageously situated, asthere Is a canning factory near by where all its pineapples win be canned. Its crop of ginger last y< r.r proved verv profitable, as It sold 37 tons at about $200 per ton, laid down in New York, we understand. The company finds a ready market In Mexico for all corn it can produce. The transportation company referred to Is known as the Chiapas Trading & Transportation Company, and some of those interested In the Mexican Plantation Company are also interested in the transportation company. This latter company guarantees the transportation of the products from the plantation to all Inland rivers nnd along the coasts, and makes direct connections with the. regular lines of steamers to New York. The officers of the Mexican Plantation company are of good standing in Philadelphia, and thus far have lived up to its promises to stockholders. Its plantation is located in the Mexican rubber belt and is favorably situated for the growth of rubber, and the quick growing crops that provided the incomewith which it has paid dividends. This company's affairs are believed to be conservatively managed. History from OldCompany.com (old stock certificate research service)