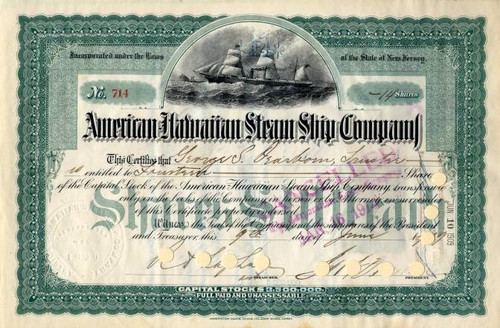 Beautiful certificate from the American Hawaiian Steam Ship Company issued in 1909. This historic document was printed by the American Bank Note Company and has an ornate border around it with a vignette of an steam ship. This item has the original signatures of the Company's President, George Dearborn and Assistant Treasurer, Roger Dearborn Lapham and is over 108 years old. The certificate was issued to George Dearborn and endorsed by him on the back. 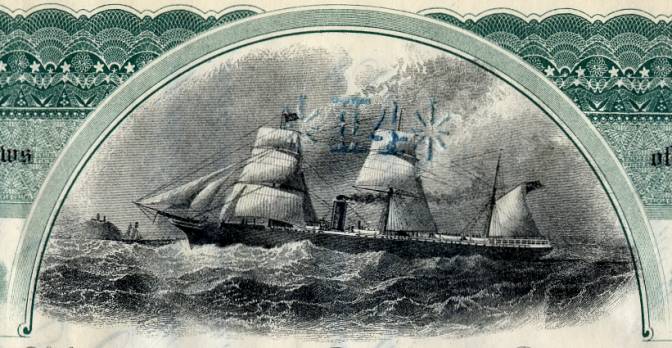 Certificate Vignette
The American-Hawaiian Steamship Company was founded in 1899 to carry cargos of sugar from Hawaii to the United States and manufactured goods back to Hawaii. Brothers-in-law George Dearborn and Lewis Henry Lapham were the key players in the founding of the company. At the time of the company's founding, its steamships sailed around South America via the Straits of Magellan to reach the East Coast ports. By 1907, the company began using the Isthmus of Tehuantepec Route. Shipments on the Tehuantepec Route would arrive at Mexican ports--Salina Cruz, Oaxaca, for eastbound cargo, and Coatzacoalcos, Veracruz for westbound cargo--and would traverse the Isthmus of Tehuantepec on the Tehuantepec National Railway. When American political troubles with Mexico closed that route, American-Hawaiian returned to the Straits of Magellan route. When the Panama Canal opened for traffic in August 1914, American-Hawaiian began routing all of its ships via this route. The temporary closure of the canal because of a series of landslides forced the company to return to the Straits of Magellan route for the third time in its history. During World War I, twelve of the company's ships were commissioned into the United States Navy; a further five were sunk by submarines or mines during the conflict. Roger Dearborn Lapham, a future mayor of San Francisco, California, served as company president in the mid-1920s. During World War II, the company operated many Liberty ships and Victory ships under the War Shipping Administration, including the Daniel Boone, the John Milledge, the John Drake Sloat, the Benjamin Goodhue and the Chanute Victory. American-Hawaiian Steam Ship Company as reported in 1912: Incorporated in 1899, under the laws of New Jersey, to operate a line of American-built cargo steamers between New York, San Diego, San Francisco, Puget Sound and the Hawaiian Islands, via the Straits of Magellan. In Jan., 1907, inaugurated a new service by way of the Isthmus of Tehuantepec, Mex., thence via the Tehuantepec National Ry., a distance of 189 miles across Mexico, to Salina Cruz on the Pacific, connecting there for Pacific Coast ports and the Hawaiian Islands. This service reduces the time between New York and San Francisco from sixty to thirty days. The company's fleet consisted of 18 steamers having an aggregate deadweight capacity of 192,000 tons said to be the largest tonnage under a single ownership operating under the American flag. Five steamers with 50,000 tons deadweight capacity under construction. Roger Dearborn Lapham (6 December 1883 16 April 1966) was a shipowner and businessman who was elected Republican mayor of San Francisco from 1944 to 1948. He was born in New York City. He was educated at Harvard, a member of the Pacific Union Club and director of the American-Hawaiian Steamship Company. Lapham championed the employers' position in the 1936 waterfront strike and was elevated as a "business" Mayor by a member of the Police Commission, J. Ward Maillard, after collapse of the Angelo Rossi constituency. Upon taking the mayor's seat, Lapham declared his intention to serve only one term. According to Radebaugh, Lapham was "so convinced of the employers' cause that he took on Harry Bridges, leader of the striking (C.I.O.) Congress of Industrial Organizations longshoremen, in public debate." Lapham presided over the formation of one of San Francisco's perennial Charter Review Commissions and the consolidation of the street railway systems to municipal ownership. Though the private franchises were set to expire in a few years, Lapham drove a horsecar up Market Street to launch a campaign for a Charter Amendment to purchase the private streetcar lines. Lapham was blamed for his plan of reducing the principle by spending the increased streetcar incomes during the war years and neglecting upkeep and maintenance of the rolling stock. An attempt to recall Lapham from office due to his increasing of streetcar fares in 1946 was fought by all four daily newspapers and failed. In 1947 he attempted to scrap the city's cable car system, claiming it was too expensive. This idea was abandoned in the face of protests, led by Friedel Klussmann, and the city retains the cable cars to this day. Lapham also presided over the founding of the United Nations in 1946. Lapham encouraged the formation of the Council for Civic Unity and he appointed the first Chinese person to the Recreation Commission and the first Negro(in the parlance of the era) to the Housing Authority. Roger Lapham was the grandfather of Harper's Magazine editor Lewis H. Lapham. History from Wikipedia and OldCompany.com (old stock certificate research service)