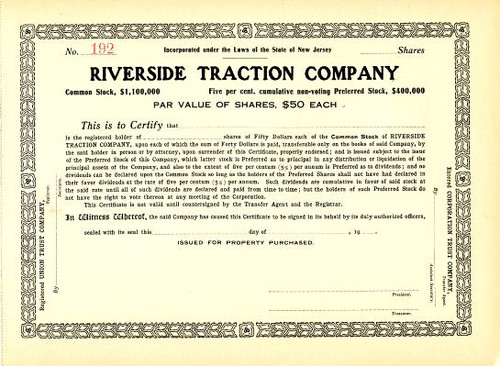 Beautiful unissued RARE certificate from the Riverside Traction Company printed in 1909. This historic document has an ornate border around it with the company's name on top. This item is over 97 years old. The Monmouth Traction Company had also begun construction of a line between Camden and Atlantic Highlands by way of Trenton in 1898, but a year later eliminated tracks beyond Trenton and became the Camden and Trenton railway. In 1900, tracks were laid through Burlington, although negotiations to establish a crossing between the trolley and the railroad tracks on Broad Street delayed construction for several months. Four years later, the line was finally opened for service, and an interchange with the Burlington County Traction Company was established. Unfortunately, travel from Camden to Trenton took three hours - longer than the railroad - and the company went into receivership in 1908. Reorganized as the Riverside Traction Company in 1910, the line met with more trouble in December of 1911, when the East Pearl Street bridge collapsed under a trolley en route from Trenton to Camden. Only the motorman and one passenger were injured, but the car was completely wrecked, and service was interrupted for two days. Four months later, the Riverside line was also leased to the Public Service Transit Corporation. Public Service operated both lines for several years, but by the 1930's new bridges spanned the Delaware River between Camden and Philadelphia, and trolley service was discontinued. Bus service was substituted, and continues to this day, now operated under the auspices of NJ Transit. Though the trolley tracks have now been removed, either during World War II scrap drives or subsequent highway reconstruction projects, the buses still follow parts of the original trolley lines. In the late 1990's, NJ Transit announced plans to reinstate passenger rail service from Trenton to Camden through Burlington, using light rail cars on the same route taken by the Camden & Amboy. Service on the line, now called the "RiverLINE," began in March of 2004.