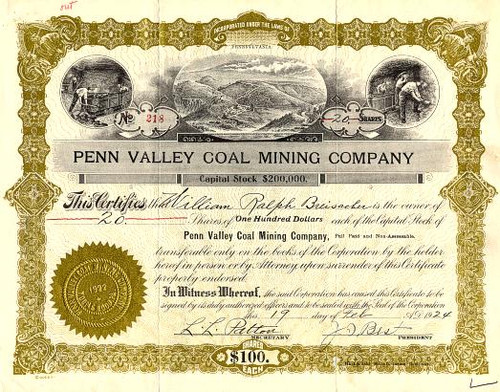 Beautifully engraved certificate from the Penn Valley Coal Mining Company issued in 1924. This historic document has an ornate gold border around it with a vignettes of three mining scenes. This item has the signatures of the Company's President, John S. Best and Secretary, L. L. Patton and is over 82 years old. Certificate has been folded in thirds for storage.

Certificate Vignette
John S. Best Background in 1922 Penn Valley Coal Mining Company With a record of thirty-three years service in the employ of the Pennsylvania Railroad Company behind him, John S. Best, prominent citizen of Youngwood, turned his energies toward the development of the town in which he had lived as a railroad man. In 1920 Mr. Best left the employ of the railroad company, after being advanced to the position of acting assistant train master, to devote his time to the coal business. In 1917, Mr. Best and his associates had organized the Lowe Coal Company and began the development of tracts of coal near Youngwood. A year later he, with others, organized the Fulton Coal & Coke Company, of which organization Mr. Best is now president. In 1920 Mr. Best, in partnership with Mr. John C. Lowe, purchased a mine near the Westmoreland County Fair Grounds, which they operate under the name of the B. & L. Coal Company. In 1922, Mr. Best and his associates organized the Penn Valley Coal Mining Company, which company purchased the properties of the Scottdale Coal Company. Mr. Best is president of this organization as well. During the same year Mr. Best assisted in the organization of the Fulton Coal Company of New York, which company was formed for the purpose of selling the coal from the various companies in which he is interested. About the same time the Penn Valley Supply Company was organized. Mr. Best serves on the board of directors of both the Fulton Coal Company of New York and the Penn Valley Supply Company. Expanding rapidly, Mr. Best, who in a few years became one of the biggest coal operators in this territory, bought, with others, the controlling interest of the Stauffer Connellsville Coke Company. However, Mr. Best's activities are not confined to the mining of coal alone. His interest in the development of Youngwood, a Pennsylvania railroad town ranking in importance with any on the Pittsburgh division, brought about the organization of the Savings & Trust Company of Youngwood, for which institution he serves as Director at the present time. In 1921 Mr. Best aided in the organization of the Youngwood Home Building and Loan Association, of which he now holds the presidency. At the present time Mr. Best's big business energies find outlet through real estate activities and his interest in coal lands throughout Westmoreland County. In politics he is a Democrat. He has not concerned himself with political activity and office holding, but has been a consistent supporter of the Democratic cause. He is a member of the Knights of Pyrhias lodge. Mr. Best was born in Decry, Weotmoreland County, on December 2, 1871. His parents were Samuel and May Elizabeth Nauce Best. He entered the employ of the Pennsylvania Railroad Company after be completed his education in the common schools of his home town. Mr. Best married Jeannette SleAuley June 1, 1893. The couple have one son, John Raymond, and three daughters, Hazel Jean, now Mrs. F. C. Kepple, Nellie Louise and Virginia Francis. During the war Mr. Best bad charge of the Liberty Loan campaigns of the Pennsylvania Railroad Company in this district and served on Red Cross drives and other war activity committees. presidency. History from Penn State and Encyberpedia.