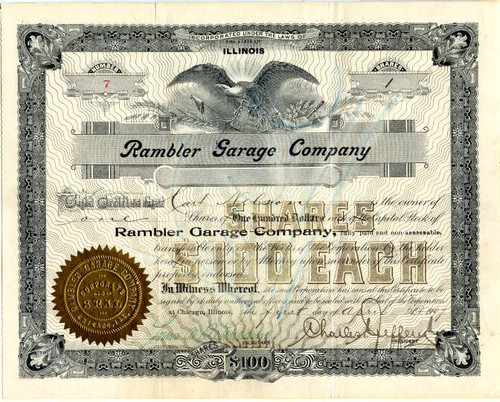 Beautiful certificate from the Rambler Garage Company printed in 1907. This historic document has an ornate border around it with a vignette of an and american bald eagle. This item has the signatures of the Company's President, Charles Thomas Jeffery and Secretary, and is over 104 years old.

Certificate Vignette
The Rambler Garage Company was billed as building the largest public garage in the country. The company was managed and owned by the Thomas B. Jeffrey Company, makers of tbe Rambler automobile. Charles Thomas Jeffery (13 May 1876 10 Nov 1935) was an American businessman. He was the son of Thomas B. Jeffery, founder of Thomas B. Jeffery Company, an automobile manufacturer. When his father died in 1910, Charles Jeffery assumed control of the Thomas B. Jeffery Company. Under his guidance, the firm continued to prosper. His most significant success was in the large number of heavy-duty trucks he manufactured. The U.S. Army was Jeffery's best customer during the years of World War I. The four-wheel, chain-drive Jeffery Quad became the workhorse of the Allied Expeditionary Force eventually. Jeffery also made impressive advances in sales of his automobile. He dropped the Rambler marque in 1914 in favor of "Jeffery" and produced 10,283 of them. Jeffery was totally committed to the company and its success before he became a passenger on the ill-fated passenger ship RMS Lusitania in 1915. It was sunk by a German submarine off the Irish coast, with a heavy loss of life. Jeffery survived, but he lost interest in the company, or as one author put it, "re-evaluated his priorities." The Jeffery Company was for sale and Charles Nash was interested. Charles Nash purchased the Thomas B Jeffery Company and Charles T Jeffery's lakeside property at 6221 Third Avenue, Kenosha. During his lifetime he collected an extensive library of rare books, maps and autographs which was sold at auction following his death at Merion, Pa. Rambler was an automobile brand name used by the Thomas B. Jeffery Company between 1900 and 1914, then by its successor, Nash Motors from 1950 to 1954, and finally by Nash's successor, American Motors Corporation from 1954 to 1969. It was often nicknamed the "Kenosha Cadillac" after its place of manufacture. The first use of the name Rambler for an American made automobile dates to 1897 when Thomas B. Jeffery of Chicago, Illinois and builder of the Rambler bicycle, constructed his first prototype automobile. After receiving positive reviews at the 1899 Chicago International Exhibition & Tournament and the first National Automobile Show in New York City, Jeffery decided to enter the automobile business. In 1900, he bought the old Sterling Bicycle Co. factory in Kenosha, Wisconsin, and set up shop. Jeffery started commercially mass-producing automobiles in 1902 and by the end of the year had produced 1,500 motorcars, one-sixth of all existing in the USA at the time. The Thomas B. Jeffery Company was the second largest auto manufacturer at that time, (behind Oldsmobile). Rambler experimented such early technical innovations as a steering wheel (as opposed to a tiller), but it was decided that such features were too advanced for the motoring public of the day, so the first production Ramblers were tiller-steered. Rambler innovated various design features and was the first to equip cars with a spare wheel-and-tire assembly. This allowed the driver, when experiencing a common puncture (flat tires) to exchange the spare wheel & tire for the flat one. In 1914, Charles T. Jeffery, Thomas B. Jeffery's son, replaced the Rambler brand name with Jeffery in honor of his now deceased father. In 1916, the Thomas B. Jeffery Company was purchased by Charles W. Nash and became Nash Motors Company in 1917. The Jeffery brand name was dropped at the time of the sale and the manufacture of Nash branded automobiles commenced. In 1937, the concern became the Nash-Kelvinator Corporation through a merger with the well-known appliance maker. History from Wikipedia and OldCompany.com (old stock certificate research service).