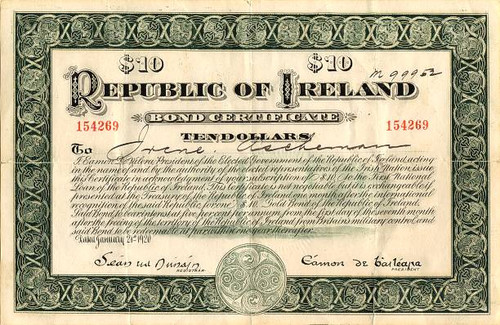 Beautiful Ten dollar Bond Certificate from the Republic of Ireland issued in 1920. This historic document has an ornate border around it. This item has the printed signature of the Eamon de Valera as president and is over 100 years old. An early certificate issued to finance the young Irish Republic. Two folds. Some signs of wear. Eamon de Valera, the president of the first DÃ¡il, the Irish revolutionary parliament, issued this bond in 1920 during the AngloIrish War--the Irish war of independence. De Valera, a leader of the 1916 Easter Rising, had been born in New York, but raised in Ireland. In 1919, after escaping from a British prison, he returned to the United States to raise funds and demand recognition of Irish independence. During his American tour, de Valera raised over five million dollars through the sale of republican bonds. Following the AngloIrish War, the Irish revolutionary government divided into factions. One faction accepted the terms of the peace treaty with Great Britain; the other, led by de Valera, opposed the treaty as it failed to grant full independence and partitioned the country. The two sides became embroiled in a brutal civil war that lasted from 1922 to 1923. The treaty supporters defeated de Valera's followers and created the Irish Free State. In the aftermath of the Irish Civil War, a dispute arose regarding the money raised by the earlier sale of the republican bonds in America. De Valera claimed the funds on behalf of his party, which remained dedicated to complete independence. The Free State government, under President William T. Cosgrave, claimed the funds on its behalf. While the Irish High Court remitted half the funds to the Irish government, the other half remained on deposit in New York. In 1927, the New York Supreme Court ruled for neither Cosgrave nor de Valera and ordered that the balance of the funds be returned to the original subscribers. Despite losing the bond dispute, de Valera continued to exert tremendous influence over Irish politics. Following the 1932 elections, less than a decade after the Irish Civil War, de Valera returned to power and served as taoiseach (prime minister) and later as president of Ireland until 1973.