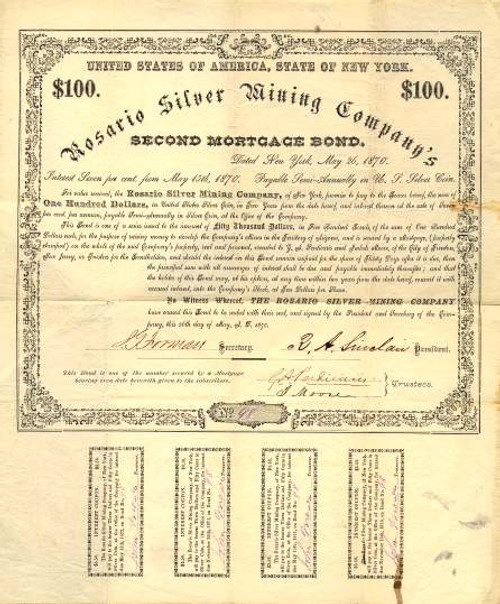 RARE $100 Bond certificate #98 payable in silver coin from the Rosario Silver Mining Company issued in 1870. This historic document has an ornate border around it with 4 unused coupons attached on the bottom. This item is hand signed by the Company's President ( R. A. Sinclair )and Secretary ( J. G. Forman ) and is over 134 years old. The company was incorporated in New York in 1868. This bond was also signed by the trustees, G. A. Perdicaris and Imlah Moore. The Corporate seal has a crossed pick & shovel. This company operated a mine 1.5 miles northwest of the famous Salero mine in the old Aztec district, which later became known as the Tyndall district. It is about 7 miles west of Patagonia. The mine was worked by Mexicans or Spaniards in the early days (1700's 1800's) and is one of the early mines discussed by Lenon and ot hers in their papers in Canty's Mining History of Arizona in three volumes. It was financed by some of Heintzelman's and Colt's associ ates in New York. Here, northwest quartz veins cutting diorite were mined (mostly prospected) for gold and silver for decades, even though by 1900 there were still less than 1000 feet of underground workings. The ore was reported to average about $25 per ton, which might be why it was merely in an advanced stage of prospecting, when Schrader wrote Mineral Deposits of the Santa Rita and Patagonia Mountains for the USGS in 1915. This company is not related to Rosario, Mexico. ( Holabird )