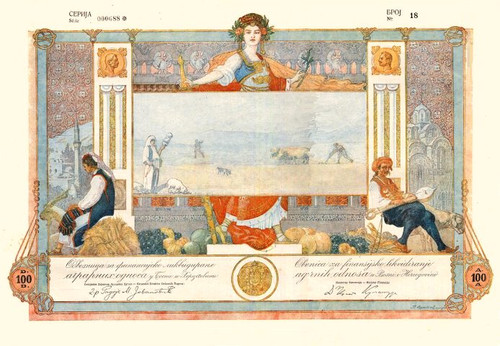 Beautiful certificate from Bosnia & Hercegovina in 1921. One Obligations de 100 Dinars, 4%. multicolour. Bond issued to repay agricultural loans in Bosnia & Hercegovina. One of the loveliest pieces we have seen. Very large format, with soft and very artistic design of peasants at work and at play. A church and a mosque, fruit and much more. The Kingdom of the Serbs, Croats and Slovenes was the name first given to Yugoslavia on its creation in 1919. This item has the signatures of the various officials and is over 86 years old. 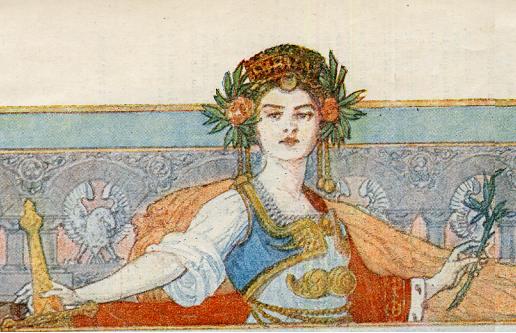 Certificate Vignette
Bosnia and Herzegovina is a country on the Balkan peninsula of Southern Europe with an area of 51,129 km² (19,741 square miles) and an estimated population of around 4 million people. The country is home to three ethnic "constituent peoples": Bosniaks, Serbs and Croats. Regardless of ethnicity, a citizen of Bosnia and Herzegovina is often identified in English as a Bosnian. In Bosnia though, the distinction between a Bosnian and a Herzegovinian is maintained, again without regard to actual ethnicity. The country is decentralized and is administratively divided into two entities, the Federation of Bosnia and Herzegovina and the Republika Srpska. Bordered by Croatia to the north, west and south, Serbia to the east, and Montenegro to the south, Bosnia and Herzegovina is landlocked, except for 20 km of the Adriatic Sea coastline,centered around the town of Neum. The interior of the country is mountainous in the center and south, hilly in the northwest, and flat in the northeast. The nation's capital and largest city is Sarajevo, seated between several high mountains. Due to its geographical location, Sarajevo was chosen to host the 1984 Winter Olympic Games. The region of Bosnia is the largest geographic region of the modern state with moderate continental climate, marked by hot summers and cold, snowy winters. Smaller Herzegovina is the southern tip of the country, with Mediterranean climate and topography. Bosnia and Herzegovina's natural resources are abundant. Formerly one of the six federal units constituting the Socialist Federal Republic of Yugoslavia, Bosnia and Herzegovina gained its independence during the Yugoslav wars of the 1990s. As a result of the Dayton Accords, the civilian peace implementation is supervised by the High Representative for Bosnia and Herzegovina selected by the Peace Implementation Council. The High Representative has many governmental and legislative powers, including the dismissal of elected and non-elected officials. More recently, the country established many central institutions (such as ministry of defense, state court, etc.) in the process of taking-over part of jurisdiction of its entities with the goal of increasing self-governance. Following the war, Bosnia was incorporated into the South Slav kingdom of Serbs, Croats and Slovenes (soon renamed Yugoslavia). Political life in Bosnia at this time was marked by two major trends: social and economic unrest over property redistribution, and formation of several political parties that frequently changed coalitions and alliances with parties in other Yugoslav regions. The dominant ideological conflict of the Yugoslav state, between Croatian regionalism and Serbian centralization, was approached differently by Bosnia's major ethnic groups and was dependent on the overall political atmosphere. Although the initial split of the country into 33 oblasts erased the presence of traditional geographic entities from the map, the efforts of Bosnian politicians such as Mehmed Spaho ensured that the six oblasts carved up from Bosnia and Herzegovina corresponded to the six sanjaks from Ottoman times and, thus, matched the country's traditional boundary as a whole. The establishment of the Kingdom of Yugoslavia in 1929, however, brought the redrawing of administrative regions into banates that purposely avoided all historical and ethnic lines, removing any trace of a Bosnian entity. Serbo-Croat tensions over the structuring of the Yugoslav state continued, with the concept of a separate Bosnian division receiving little or no consideration. The famous CvetkoviÃ¦-MaÃ¨ek agreement that created the Croatian banate in 1939 encouraged what was essentially a partition of Bosnia between Croatia and Serbia. However, outside political circumstances forced Yugoslav politicians to shift their attention to the rising threat posed by Adolf Hitler's Nazi Germany. Following a period that saw attempts at appeasement, the signing of the Tripartite Treaty, and a coup d'Ã©tat, Yugoslavia was finally invaded by Germany on April 6, 1941. History from Wikipedia and OldCompanyResearch.com.